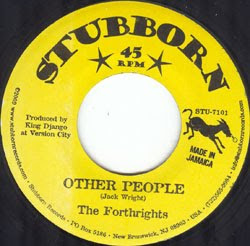 If you're not already familiar with them, The Forthrights are vintage-sounding rocksteady crew based in Brooklyn with a laid-back, soulful sound that is in a similar vein to acts like The Bluebeats, The Slackers, and The Insteps (remember them?). I picked up this single after catching their terrific set at a Knitting Factory Brooklyn gig, and after hearing it, can say that this recording accurately captures the vibe and essence of their live performance (which is no small feat, since something is usually lost in the transition from stage to studio).

Expertly produced by King Django at his Jersey Version City, The Forthrights' "Other People" may be wrapped in an almost cheery--and definitely catchy--melody (singer/keyboardist Jack Wright can compose a really sweet tune), but it doesn't bury the heartache of rejection in the lyrics: "There are other people in world for you and I, yeah/You can get what you want, but what you want is to be free/I know you're no longer infatuated with Cincinnati/Yeah, I know that my soul will always rest in her..." Django steps up to the mic on the flip side, a version of "Other People" titled "Anywhere I Roam," where he playfully boasts like Prince Buster about his mad lyrical and musical skills, while slyly celebrating his sexual and emotional freedom: "Anywhere I roam/That's where I make my home/So mind where you lay up your britches/A home is where you can scratch where it itches!"

This single is an instant classic. Get it!

if they ever get around to finishing up the album, its gonna be amazing. ive been listening to rough demos for about a year now and i cant wait for the lp.

Hi there, great advice i havent heard of them, pretty good tune! thanks

here is some reggae from Mexico also.
greetings

All this scratching is making me itch.