NYC Gig Reminder: The English Beat, Bad Manners, and Chris Murray This Saturday Nite! Plus the Battle of The Beats! 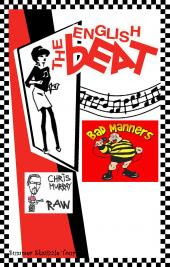 If you're not fleeing the city this weekend--it is one of the last few weekends of the summer, after all, and we New Yorkers need to get away once every now and then to keep our freakin' sanity!--you might want to catch Dave Wakeling's US version of The Beat, Bad Manners, and Chris Murray at Webster Hall. The gig takes place this Saturday night, August 21, beginning at 6:00 pm (you read that correctly). Tix are $30.

In related Beat news, the UK version of the band, led by Ranking Roger (and featuring original Beat drummer Everett Morton and General Public/Dexy's Midnight Runners keyboardist Mickey Billingham), will be celebrating the 30th anniversary of the release of I Just Can't Stop It by performing the entire album live. According to AltSounds.com, this event will take place at London's Bloomsbury Ballroom on Saturday October 9th, 2010.

Also, The Beat's MySpace page states that they have recorded an album of new material that is being mixed by boss dub producer Adrian Sherwood. I have to admit to being intrigued by this development (and for the past year or so, Dave has mentioned in various interviews that he is recording or has recorded his own new Beat material, too--maybe we'll have two new Beat releases at some point in the near future?).
Posted by Steve from Moon at 10:41 PM

Stoked for this show! I didn't realize Chris Murray was on it as well. He was great when he played with Vic Ruggiero and the Forthrights a month back.

I caught the Beat when they came through with Reel Big Fish and year or so back and I hope he has that band with him still.

I have that Beat record. It was actually recorded a few years ago, but has been sitting in limbo...unless they have recorded a completely new one, which I find unlikely. I have that album plus some other unreleased items due to Andy Pearson, who played with them for years and recorded with them on bass, who was in the Toasters for the past couple years. He bought me a bunch of stuff last time he came to the states ;)

Looking forward to see this show (again), same show as last year except chris murray! which I haven't seen since 96 at the chance in poughkeepsie. wow been a long time.

I saw Andy Pearson's photo on the UK Beat website. Is the new material any good? Let us know!

I just read a review of their show in Philly, which was really positive: http://media.www.thetriangle.org/media/storage/paper689/news/2010/08/20/ArtsEntertainment/Ska-Veterans.The.English.Beat.Still.Entertain.All.Ages.At.Show-3924642.shtml.