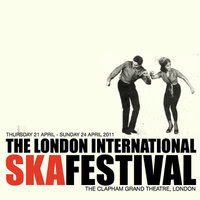 Some Duff Guide to Ska readers may already be aware that Sean Flowerdew of Pama Int'l and Rockers Revolt Records is organizing a 2011 London International Ska Festival along the lines of the ones that took place back in the late 80s/early 90s. In fact, Sean promoted the very first London International Ska Festival in 1988, which featured an astoundingly good line-up: Laurel Aitken, Bad Manners, Potato 5, The Loafers, Hotknives, The Deltones, Napoleon Solo, Capone and The Bullets, and Skin Deep! (I remember writing a letter to Bucket around that time urging him/Moon Records to organize some sort of similar ska festival at CBGB's! I was a poor college kid who had no way of making it over to the UK, so I hoped that some of this great ska could find its way to NYC.)

So for those of you who are not in the know, here are the details. Next year's ska fest will take place at London's Clapham Grand Theatre, from Thursday April 21, 2011 through to Sunday April 24, 2011. The festival will feature 23 bands from all over the world, as well as nine top ska DJs. To stay up on the latest developments, check out the 2011 LISF Facebook page. You can even suggest which bands should appear on the bill...

If you're not in the London area, start saving your travel pennies for (or whatever the equivalent is in your local currency) now!
Posted by Steve from Moon at 5:02 PM