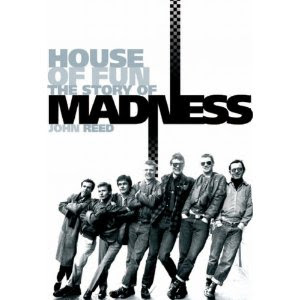 In its lively review of the new Madness biography, MOJO Magazine bestows four stars on the "meticulously researched," 500 page (!) "House of Fun: The Story of Madness," written by John Reed. The MOJO reviewer David Hutcheon describes their rise from "a folk group, rooted in Irish traditions and English music hall" crossed with "Mods, skinheads, and football hooligans swaggering in the streets" to a top 10 singles powerhouse ("trying to improve themselves and do right by their fans") as "a five-year period in which The Specials were the conscience of the nation while Madness were its court jesters."

The fall, too, is covered--apparently life has not been kind to many members of the band in the years since they ruled the charts--so the redemption afforded the band by the nostalgia of Madstock and the magnificent accomplishment of The Liberty of Norton Folgate makes up for their years in the wilderness.

Madness is also releasing "Gogglebox," a four-DVD set (that plays in all regions) in late November (with a list price of 50 pounds, which may be a bit steep for US fans, with our poor exchange rate!). Here's what's inside:

- DVD #1: "The Liberty Of Norton Folgate" Film (a behind-the-scenes documentary)

- DVD #2: "Take It Or Leave It" (a 1981 documentary/comedy/drama about Madness directed by Stiff Records label head Dave Robinson, who also helmed their music videos)

It's over seven hours of Madness goodness for fans!

As you know, the band has been releasing remastered and expanded versions of all of their original albums (including double 10" vinyl editions of One Step Beyond..., Absolutely, and 7, which can be picked up through Rockers Revolt), but I had missed the fact that their 1999, long out-of-print album Wonderful has been reissued with a bonus disc, too. This wasn't on my radar then, so I need to pick up a copy now!

Dates for Madness' November/December "Do Not Adjust Your Nut Tour" of the UK can be found here.
Posted by Steve from Moon at 1:20 PM