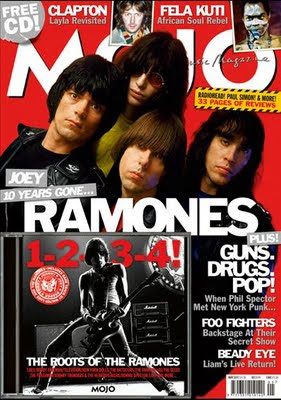 Compared to this month's Vive Le Rock!, the May 2011 MOJO has scant ska or reggae coverage to offer, even though there are plenty of worthy releases coming out/bands touring, etc. (Hmmm...the 2011 London International Ska Festival doesn't rate at least some sort of preview?!) However, MOJO cover boys The Ramones give me the opportunity to recount two minor Joey Ramone-ska connections. For a brief time in the late 80s, Joey Ramone owned a small club called Downtown that was located in the basement of a building that was just off Broadway on Bond Street. In 1989 or 1990, I caught a show there with the newly-minted, Django-led ska act Skinnerbox--my brother's best friend Steve Abrams was their guitarist at the time--and NYC Oi band The Press; afterwards, Steve invited me backstage to hang out. As it turns out, it was Joey Ramones' birthday (May 19) and they were holding a little celebration for him. So, fortified by all of the beer sloshing around in my belly, I went up to the punk legend that towered over me (even as hunched over as he was), thrust my hand into his and wished him a happy birthday. Joey said something like, "Thanks, man!" and offered me some of his cake, which I gobbled down when not smiling ear to ear. It was a great New York moment--the kind that reinforced the notion that you lived in the greatest city in the world. (Even though he wouldn't have known me from Adam, I passed by him many times in the East/West Village throughout the 90s...he'd just be walking around with a friend as I was on my way to work or a record shop.)

The other ska gig I caught at Downtown was an ultra-rare NYC appearance by The Untouchables (which must have been sometime in the winter or spring of 1989). Even though the album that they were touring in support of (Double OO Soul) was less than stellar (my friend Andy was reluctant to see the show, since he'd heard bad things about the record), The Untouchables unleashed one of most brilliant and energetic live performances I've ever seen (Black Rock Coaltion funk-metal rockers 24-7 Spyz were also on the bill and were extraordinarily good). Most of The Untouchables' set that night was comprised of cuts from Wild Child, their debut album, which is a must for every self-respecting ska fan's collection (and my compatriot Marco on the Bass has a great appreciation of the band and this record here).

Even though this is a little off topic, it should be noted that the articles in MOJO about The Ramones are excellent, including one that reveals that Joey's pretty severe Obsessive Compulsive Disorder--which had afflicted him since he was a kid--led to his demise ten years ago (on April 15, 2001 at the shockingly young age of 49). Joey had been convinced that he had not closed his chiropractor's door properly--he'd already gone uptown earlier in the night to check it once--but decided to go check again at 6:00 am on December 31, 2000. He slipped on some ice outside his Village apartment and ended up breaking his hip--he'd had lymphatic cancer since 1994 and the medication he'd been taking to treat it caused his bones to become very brittle and fragile. To fix the hip, he had to go off the cancer drugs, which gave the cancer the opening it needed to complete its terrible work. Earlier that year, Joey had become friends with Bono, who offered to take care of his medical bills when he found out that Joey was in the hospital--and Bono was one of the last people to talk to Joey on the phone when he was in intensive care (when they unplug Joey from the respirator, U2's "In a Little While" from All That You Can't Leave Behind is playing on the boombox). It's heartbreaking stuff.

As for this month's attention to ska, there is a short, positive review of the Pressure Drop expanded reissue of Bad Manners' debut Ska'n'B (they should also have mentioned the reissues of Loonee Tunes, Gosh It's... and Forging Ahead while they were at it). Ian Harrison praises the reissue of Big Youth's awesome Screaming Target LP on Sunspot in his "Vinyl Countdown" column. There is also a double review of Looking Back: The Jamaican Chart Hits of 1958 and 1959 and Easy Snapping: The Jamaican Chart Hits of 1960 (Sunrise Records), which documents the roots and rise of the Jamaican music industry as reflected in the island's record sales charts for each of these years. In '58 and '59, the R&B pumping out of New Orleans dominated (with artists like Louis Jordan, Fats Domino, Louis Prima, Perez Prado, The Platters, The Drifters, and Nat King Cole), but by 1960 Laurel Aitken, Owen Gray, and Jackie Edwards were making this style their own. Then things started shifting away from the American sounds towards something closer to Jamaican ska with the involvement of sound system owners Duke Reid, Clement Dodd and others. Reviewer Lloyd Bradley gives both comps (compiled and with liner notes by Laurence Cane-Honeysett) four stars.

Lastly, David Katz reviews the documentary "Rocksteady: The Roots of Reggae," directed by Stascha Bader. The original plan for the movie was to have guitarist Lynn Taitt return to JA for a concert and to re-record rocksteady hits with their 60s-era vocalists. But Taitt had to drop out to undergo cancer treatment (he died earlier this year of cardiac arrest after being hospitalized for pneumonia--read Brian Keyo's extraordinary tribute to Lynn Taitt here). Despite this major setback, the filmmaker was able to connect with and record performances by many in the rocksteady firmament (including Ken Boothe, Hopeton Lewis, Judy Mowatt, Dawn Penn, Derrick Morgan, Leroy Sibbles, The Tamlins, Stranger Cole, Ernest Ranglin, and Marcia Griffiths). Katz gives "Rocksteady" four stars, so I think I'd better track this one down and give it a look...(indeed, the trailer looks amazing and the newly recorded cuts sound out of this world).
Posted by Steve from Moon at 12:21 AM

Lynn Taitt actually didn't die of cancer. I interviewed his widow shortly after his passing, in January 2010.
Also, the Guardian photo was cropped, to see the full photo, with horn section, and many more check this;
http://tallawah.com/articles-reviews/lynn-taitt/

Thanks for your comments and the link to your amazing tribute to Lynn Taitt!

I will update my post to reflect the actual cause of death.