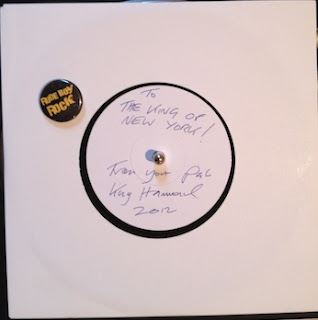 Frustration over how illegal music file sharing has eaten away at the sales of his recent batch of really superb CDs (The King and I, Jacuzzi, Showbiz, and Dancing in the Garden of Evil), coupled with his deep rooted love of vinyl records, has led King Hammond (AKA Nick Welsh) to focus his next batch of releases on limited-edition, white label singles that are signed and personalized for each purchaser (mine reads, "To The King of New York! From your pal, King Hammond"). This release also happens to include a "Rude Boy Rock" badge designed by Paul Willo (which is a nice touch and something very much appreciated by those of us who grew up sporting band buttons on our overcoats, parkas, and flight jackets). While this approach definitely appeals to the old school ska fan, I hope that it helps shape the behaviors of the new ones (I buy CDs and LPs for my son as birthday/Xmas gifts, etc. and he has begun to like going with me to new and used record stores to make his own purchases). So if you don't already have one, it's probably time to go scour the thrift shops or eBay for a turntable, because it's looking more and more like ska musicians are going to be releasing a good portion of their recorded music exclusively on vinyl (for the latest example, see the two Dr. Ring Ding Ska-Vaganza singles on Jump Up Records).

As of late, Nick (with help from Paul "You're Wondering Now" Willo) has been working on penning his autobiography "The Life and Times of a Ska Man," chronicling his fascinating and oftentimes amusing experiences as a musician/songwriter/producer (with Bad Manners, The Selecter, Big 5, 3 Men and a Black, Skaville UK, King Hammond, Prince Buster, Lee Perry, and Laurel Aitken)--and it appears that this look back is probably the inspiration for this fantastic cut, "Rude Boy Rock." The track opens with a long spoken-word introduction over a wicked, funky skinhead reggae rhythm: "When I was a teenager growing up in North London in the early 70s, I loved my reggae. You know, a bit of Trojan, Island, all that gear. But at the same time, I was banging on what the media would call glam rock. Although to me, it was just pop music: T. Rex, Slade, Sweet. And even way back then, I thought one day I'll have a band of my own and I'd mix these two kinds of music together and call it "Rude Boy Rock." Well, it's taken a little bit longer than I'd thought, but here we go..." The music then shifts into glam/punk power chords for the "Rude Boy Rock" chorus and back to dirty reggae for the subsequent verses that recount his discovery of "that beautiful, amphetamine-fueled sound of punk rock," while simultaneously maintaining his all-out obsession with ska and reggae.

Having hit the mid-century mark, King Hammond is one of the few still active second generation of ska musicians producing high-quality new music. In this role, he seems to relish being a part Homer-like epic poet of ska (the keeper of ska history, which is retold for the benefit of younger fans) and part pub stool raconteur eager to give you the straight skinny behind all the myths. And that's what is so appealing about this track--KH is a stellar storyteller and in recounting/revealing his personal history directly for his most fervent fans, he forges an even closer relationship between himself and his supporters ("...did he just essentially tell us that he thought up ska-punk years before it actually came into being?!"). In this age when pop culture is increasingly decentralized and sliced up into millions of micro channels catering to tiny audiences, giving your people what they want is more vital than ever to a professional musician's survival.

On the flip side, King Hammond collaborator Sammy Buzz delivers the rude record "Ruff Ride Ruff," which expands upon the theme of--and appropriates some of the music from--Prince Buster's perennial favorite "Rough Rider." Sammy sings and toasts: "She's rough in the morning/She's rough in the evening...She rougher than the carpet in my room/Tougher than the bristles pon a broom/Rougher than the pet hedgehog/Rough like a flea bitten dog..." The painfully absurd imagery/humor here takes some of the bite out of the slack lyrics--but they're still kind of lewd! Yet, you get the feeling that this track is really about honoring the tradition of the rude sides by musicians like The Prince and Lloyd Charmers (AKA Lloydie and the Lowbites) than really titillating the dirty 14 year-old lurking inside all of us.

If you're a King Hammond fan, this record is a must--and for those of you who aren't on board the King Hammond train to Reggae City, what are waiting for? You're missing out on some of the best ska out there!