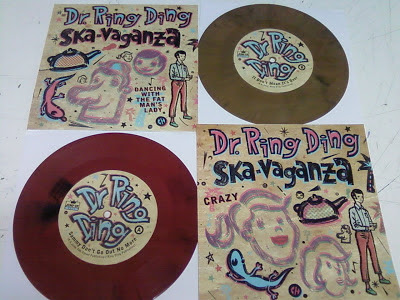 These two phenomenal singles from the immensely gifted Dr. Ring Ding are the first vintage ska musical biscuits from his brand new album Piping Hot (Pork Pie is releasing the CD/Buenritmo is issuing the LP)--recorded with the Freedom Street Band (who serve as the rhythm section; they, along with other guest artists from the ska world, comprise the Dr. Ring Ding Ska-Vaganza). Both singles' A sides feature Dr. Ring Ding compositions from Piping Hot, while the Bs contain songs exclusive to these singles (one cover; one original). All in all, a great bang for the ska consumer's buck.

If you were tuned into the more traditional frequencies of the 90s ska scene, you know that Dr. Ring Ding and the Allstars' Dandimite (1995) and Ram Di Dance (1997) were two of the finest modern old school ska albums ever recorded--in a style similar to that of The Skatalites paired with some of the greatest singers of that era, like Laurel Aitken, Lord Tanamo, Stranger Cole, and a million other incredible JA vocalists (the Mango Intensified, Original Ska 1962-1966 and More Intensified, Original Ska 1963-1967, Vol. 2 comps were like blueprints used to build this band and construct its sound).

Longtime fans will be psyched to find that the new Dr. Ring Ding Ska-Vaganza material picks right up where Dandimite and Ram Di Dance (and Lord Tanamo with Dr. Ring Ding and the Senior Allstars' Best Place in the World) left off, with The Freedom Street Band providing an equally excellent--yet more organic sounding--backing to the good Doctor's colorful vocals.

Side A: "Sammy Don't Go Out No More" is a ska stomper of a tribute/lament to those who retire from or age/drop out of a scene (I, for one, even as I hit true middle age, refuse to consider this possibility): "Sammy don't go out no more/You won't see him walk through that door...No more weekend specials at the bars downtown/No more ladies nights/and no more two for one/These days are long time gone!"

Side B: "Crazy" is a swinging ska cover of the Willie Nelson country ballad immortalized by Patsy Cline. You know a song is expertly crafted if it can be versioned in a completely different genre and sound just as good as the original (of course, it helps to be in the hands of someone of the calibre of the good Doctor!). This is a rare Dr. Ring Ding track that fans will want in their collection.

Side A: "Dancing with the Fat Man's Lady" may remind you of one of Laurel Aitken's more upbeat rhythm and blues/ska tracks mixed with the knowing naughtiness of a song like "Shame and Scandal." Everyone is gleefully indulging in their own vices/transgressions (and getting over/off on others while doing it): "While we were almost mating/the guy was masticating/Having the time of his life..." But the singer is (kind of) redeemed, since the Fat Man is the stereotypical bad guy in JA musical shorthand, so score one for the good guys (or more like, the good guy scored!).

These two singles--and I imagine the accompanying Piping Hot album--represent some of the best ska music you can expect to hear this year. They're highly recommended.