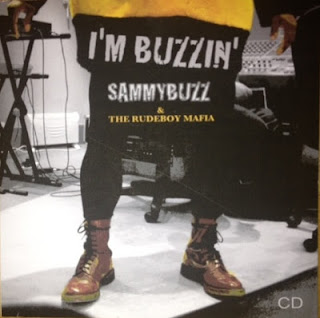 If you've been following the great King Hammond, you're aware that Sammy Buzz of the Rudeboy Mafia (who back Sammy here and King Hammond whenever he plays live) is one of KH's musical collaborators and has been featured on KH tracks like "Rocking on Ridley Road" (from Showbiz). As King Hammond produced and co-wrote two of the three songs with Mr. Buzz on this EP, it won't surprise you to find that the brand of ska here is reminiscent of the catchy, lively late 80s tracks that KH--as his alter ego Nick Welsh--was composing for Bad Manners (see any of the stellar cuts Nick wrote on the magnificent Return of the Ugly album, such as "Skaville UK," "Memory Train," "Since You've Gone Away"). So, if you're a fan of Nick's work with the Fat Bastard or as King Hammond, you're going to be predisposed to liking what Sammy Buzz has got going here. The charming, semi-autobiographical, and very catchy songs collected on the I'm Buzzin' EP give Sammy Buzz his sweet moment in the sun--and he takes complete advantage of this opportunity to show off his talents and shine.

"I'm Buzzin'" spells out Sammy Buzz's let-the-good-times-roll, can't-change-fate approach to life ("I'm buzzing'/but I'm not out of my mind/Don't need no complication/An easy life for me/Don't work, no botheration/Yeah, what will be will be"). A very nice slice of upbeat ska for when your troubles might be grinding you down.

"Licks" isn't about trying to figure out how many it takes to get to the center of a Tootsie Pop (or anything risqué), but suffering repeated beatings as a kid (it's kind of horrifying to think about now, but I guess that it was a different time, place, and mindset). This skinhead reggay tune lays out Sammy's youthful experiences in corporal punishment inflicted upon him by his parents, peers, and teachers ("Remember back a school yard/the bicycle shed/the teacher saw me kiss you/and sent me to the Head/He gave me licks..."). It's not a mournful tune (the music is quite sprightly, actually)--but it is steadfastly defiant in its matter of fact-ness: he survived and can sing about it with a bit of humor all these years later.

"Cigarettes" is a public service announcement with a ska beat (and cheesy, 70s-sounding keyboard lines!), urging listeners to quit this pernicious, addictive habit before it's too late ("Cigarette, cigarette/It can cause your death"), and Sammy offers a few hair-raising examples of why one should quit: "I had a friend called Bernadette/who was addicted to a cigarette/She smoked all day/in bed at night/until her bedroom, it catch alight/She's not with us anymore/Now's she's knocking on Heaven's door/A big fat lesson to all of you/give up the cigarette, it's overdue!"

In many ways, this EP reminds me of the glory days of the UK ska scene in the mid to late 80--and the joy and delight the top bands of that era (Potato 5, The Trojans, Laurel Aitken, The Deltones, The Loafers, etc.) took in following their post-2 Tone ska musical vision, even if was out of step with, or contrary to, the larger, contemporary musical scene. It simply was brilliant musicians playing the music they fiercely loved. And they had one hell of a fun time doing it. That's the essence of I'm Buzzin'.