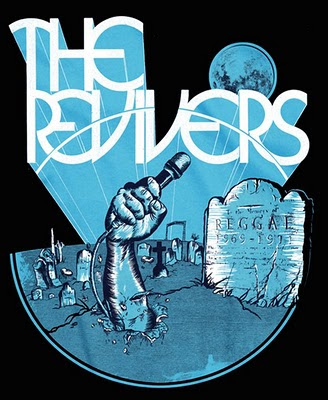 Skinhead reggae fans are sure to flip when they first take a listen to The Revivers' new five-track 10" EP, Early Reggae--it sounds like some fantastic lost gem from 1970 that you were lucky enough to dig out from a long-forgotten crate at a used record store. Even though they sound like they're straight from JA, The Revivers are comprised of members of such SoCal ska/reggae stalwarts as The Debonaires, The Skeletones, and See Spot and you can bet that they know their way around a vintage early reggae tune.

Recorded using old-school, lo-fi techniques and equipment, The Revivers convincingly recreate the sound and vibe of Jamaican music circa '68-'71. On Early Reggae, The Revivers' choice covers include The Beechers' "adults only" cut "Come into My Parlour" ("I hear those boys with their rumours/Said you're a real grinder"); producer Clancy Eccles' house band The Dynamites' organ-driven instrumental "Ramble"; The Yardbrooms' pleading "My Desire"; Sir Collins & The Black Diamonds' slinky and slightly dangerous "Black Panther"; and Pat Satchmo's cover of "Hello Dolly" (which skates a bit close to parody with the Louis Armstrong imitation vocal).

While this reviewer is not too familiar with these amazing original tunes--which appeared on the Trojan, Upsetter, and Duke imprints--they sure sound mighty sweet here.

(Thanks to Jason Lawless at Lawless Street for doing all the research on the original tracks.)

The Duff Guide to Ska Grade: A-
Posted by Steve from Moon at 3:21 PM

Great, great record. Though I would love to hear some new Debonaires or Skeletones.

That would be great, too!