Duff Guide MOJO Watch: Dennis Brown, Culture, U-Roy, and The Upsetters! Plus The Clash and Return of BAD! 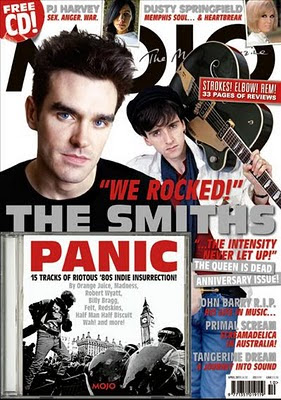 As always, MOJO Magazine continues to be one of the few mainstream music publications offering consistently good coverage of ska and reggae (even if it tends to be generally backward-looking--re-issues, re-unions, and such--and not so much on the current scene...but, we'll take whatever we can get!).

This month's issue features The Smiths on the cover--and I'll cop to having an intense love/hate relationship with the band. "How Soon is Now?" is probably one of the best New Wave songs of the 80s (more often than not, it was cranking on the radio in the family Oldsmobile station wagon that I used to cruise Yonkers and the Bronx in high school); Johnny Marr is a musical genius; and I still intensely love at least half of the songs in their catalogue. Having said that, you gotta take Morrissey in small doses. Case in point: driving back to the city from upstate recently, I had The Sound of The Smiths playing on the stereo and after about 30 minutes (the playlist: "Bigmouth Strikes Again," "There is a Light That Never Goes Out," "Panic," "Ask," "Shoplifters of the World Unite," "Sheila Take a Bow" and "Girlfriend in a Coma"), my wife was clawing at her ears and hoping that a double-decker bus would smash into us...

Now back to our regularly scheduled ska and reggae programming!

In the April 2011 issue of MOJO, reggae expert David Katz gives the new Dennis Brown At Joe Gibbs (17 North Parade) box set four stars ("The overall feeling is of an exceptional talent fully in command of his abilities, backed by some of the best reggae players of all time"). Culture's At Joe Gibbs (17 North Parade) also rates four stars (Katz writes, "This box set reissues the two initial Gibbs produced albums [Two Sevens Clash and Baldhead Bridge], plus a later Gibbs compilation More Culture, and a bonus disc of rare singles from the same era, all of which still sounds truly fine today").

Ian Harrison notes in his "The Vinyl Countdown" column that I-Roy's Gussie Presenting I Roy has been re-issued on 180 gm vinyl by Sunspot (and that this imprint will be releasing Big Youth's awesome Screaming Target next). And the "Filter Reissues Extra" section heralds the millionth reissue of The Upsetters' Blackboard Jungle (Get on Down); I already have several different versions of this album, so I think I'll pass on this one.

Fans of Bob Marley and the Wailers may be interested in the review of the new book "I & I: The Natural Mystics Marley, Tosh & Wailer" by Colin Grant. Andrew Perry dubs it worthy of four stars--and notes that perhaps one of the more interesting observations it makes concerns the band's--and Marley's in particular--embrace of Rastafarianism. Perry writes, "For Marley, it was all about coming through the confusion of his mixed-race parentage, the author believes, and asserting his blackness." "The Small Axe Guide to Dub" by Jim Dooley is also evaluated (by David Katz, who gives it four stars out of five)--it's a guide to over 200 of the best dub albums--and judged to be "a very useful reference point for all dubheads".

Bonus: News from The Only Band That Mattered! Yeah, I know this is a ska blog, but The Clash incorporated a lot of ska and reggae into their mix--plus I'm a enormous fan--so they're getting some space here! There was an incredible feature article in the March 3, 2011 of Rolling Stone (with the tween pop anti-Christ Justin Beiber on the cover) about the rise and crash of The Clash: "The Fury and the Power of the Clash" by Mikal Gilmore. The piece is not available on-line unless you have a subscription (though there is a short interview with Mikal Gilmore about his interactions with The Clash over the years posted here), so track down a copy of this issue at your local magazine shop or newsstand.

And in Clash-related news, MOJO reports on the return of Big Audio Dynamite. BAD has reunited and is touring the UK and the US this spring (playing Roseland in NYC on 4/19/11--I've got tix, but had to sacrifice an arm and leg to do so). BAD's 1985 debut, This is Big Audio Dynamite, was re-issued with bonus tracks last year and MOJO notes that their follow-up, No. 10, Upping St., which was co-written and produced with Joe Strummer, will be coming out the pipeline this year. According to Mick Jones, there are a bunch of unreleased tracks demos penned by (and maybe even featuring) Strummer from these sessions knocking about Jones' flat that might be included on this expanded version!

Apparently, Jonesy was inspired to get BAD back together after touring with the Gorillaz (Jones: "...there was a continuity from BAD that came to me, they were trying a similar kind of aesthetic that I recognized"). The version of BAD hitting the road (dates below) is the original 1985-1989 line-up: