New Album from Dub is A Weapon: Vaporized 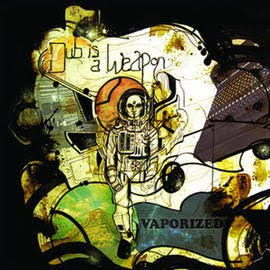 NYC's brilliant Dub Is A Weapon will be releasing their long-awaited new CD "Vaporized" on 4/26/11 through Harmonized Records. However, you don't have to wait until then to check out the album--you can preview all the tracks here, as well as download some free mp3s of other DIAW material (some of it live) here.

Dub is A Weapon will also be gigging in New York and New England this March and April (note the NYC record release party on 4/16/11), in addition to playing some shows with John Brown's Body.

Also, on Thursday nights when Dub Is A Weapon isn't on the road, band leader Dave Hahn hits the decks as Hahn Solo, hosting "Roots Rock Reggae" alongside Carter Van Pelt (WKCR-FM) at Motor City Bar in Manhattan (127 Ludlow between Rivington and Delancey). They spin reggae wax from 6:30 pm 'til 10:00 pm--and it's free!
Posted by Steve from Moon at 1:30 PM

Email ThisBlogThis!Share to TwitterShare to FacebookShare to Pinterest
Labels: Dub is a Weapon, John Brown's Body