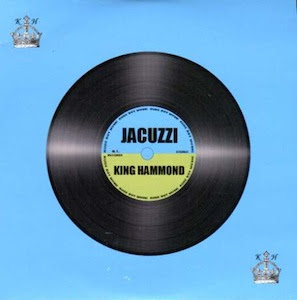 Who else but the great King Hammond (AKA Nick Welsh, songwriter-bassist-singer for Skaville UK, The Selecter, Big 5, and Bad Manners) would be audacious enough to release not one but two stellar albums (the other record in question is the killer The King and I; you can read our review of it here)--as well as a pair of spin-off vinyl EPs, Riot in London Town and Hey Mr. DJ--all within a six-month period?! Jacuzzi contains everything that one could ask of King Hammond and more: super catchy ska and skinhead reggae tunes; wonderfully cheeky lyrics; booty-shaking, groovin' grooves; and impeccable performances (which are all more impressive, as I think Nick played every instrument on the album--at one point in "Reggay Train" he shouts out, sounding a bit surprised himself, "King Hammond's on the fiddle!").

The hot tub of the shimmering title track (and you gotta love how the chorus goes "Jah, Jah, Jah-cuzzi") is a people soup metaphor for slumming it on the seamier, ethically-challenged, hedonistic side of life. You know in your heart and head that giving into temptation is wrong, but it feels so damn right: "Holy Mother, forgive me for my sins/I always fall from grace when the day begins/Look into my eyes and tell me what you see?/The grand illusion or cold reality?/Bad drugs and Englishmen are only a call away/For the Cowboys and the Indians, who want to come and play/in the jacuzzi?...Look back in wonder at Paradise missed/but I was in the deep end of a personal abyss/When luck was handed out, I guess I missed the queue/I couldn't get my jeans on in time to meet with you." It's the hell of being keenly self-aware (coupled with a working knowledge of right and wrong) and the heaven of getting off on one's vices (hey, everybody's got their own angel and devil whispering in each ear: "All men are equal...in the jacuzzi!")

"Riot in London Town" (which also appears on its eponymous EP) bemoans the fact that so much of London is being torn down and replaced with crap architecture. The hippie pop psychedelia of the late 1960s--the flip side of the mod/skinhead revolution--typically creeps in the edges of King Hammond's music as it, no doubt, influenced the skinhead reggae artists of the day. On "Hammond-edlic!," the King lets his freak flag fly, urging listeners to "drop in...drop out" on this throbbing, deeply-layered, incredibly trippy and funky reggay instrumental (did I hear tablas in there?). Without question, this is my favorite track on the album.

"Tattoo Girls" is a loping ode to ladies with ink ("Rude girls in Mexico, Rockabillies in the USA!"). "Reggay Train" builds on the proto-skinhead reggae rhythm of The Pioneers' "Long Shot Kick De Bucket" and/or Symarip's "Skinhead Moonstomp" (which is really Derrick Morgan's "Moon Hop") to deliver us in rude boy style to Rainbow City circa 1969. "Chicken and Chips" celebrates King Hammond's addiction to KFC's crispy (or extra-crispy?) product, though it's all presented/projected through a female protagonist (before Nick set me straight, I thought this was a song about lesbians--"That girl just eats chicken and chips/She won't put nothing else to her lips...She used to be finger lickin' good--better than the rest/Now the thing that turns her on is leg or a breast"--I'm always on the lookout for the subtext in everything, real or imagined!).

"They Will Rise" is a cheery, calypso-esque warning to all righteous souls not to surrender an inch to the many bad-minded people amongst us: "And if you feel like you've been taken/You're not the first, won't be the last/And if you let them rule your situation/They will rise..." While we're on the subject of people trying to do us in, the King kisses off an ex that specialized in head games in "Three Card Trick" ("I don't want to play that game no more!").

"Bongo Ska Fever" is an awesomely propulsive vintage ska stomper that Prince Buster never wrote (love how he pronounces 'ska' as 'skar'), while "From the Hip" smoothly visits Harry J's All Stars territory. "The Hanky Panky" ("King Hammond has ESP/Extra! Sexual! Perception!...Girls and boys/like the hanky panky/Have some fun/you know it's true/They like to kiss it up/they want to hug it up, too/they like to feel it up/and then they follow it through") and "Reggae Movement #2" (which alludes to a certain part of the body "moving" in every sense of the word) are knowing, slightly naughty dirty reggae instrumental cuts that would make it past the broadcast censors, but still have the inner-twelve-year-olds in us snickering away, 'cause we really know what they are all about.

As always, King Hammond manages to successfully embody the spirit and sound of late sixties skinhead reggae while creating thoroughly original and winning cuts. It really doesn't get much better than this--count me amongst the King's loyal musical subjects! Long live King Hammond!

The Duff Guide to Ska Grade: A
Posted by Steve from Moon at 12:44 AM