Duff Review: The Selecter "Back to Black" 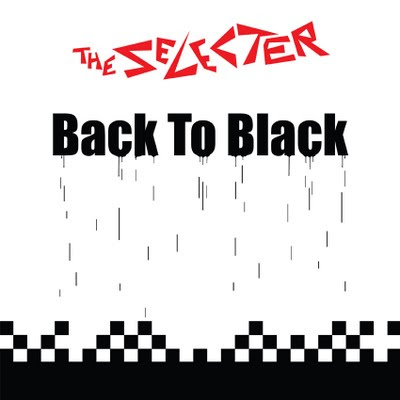 On the flip side of their new double-A single (the other track is version of Woody Guthrie's "All You Fascists" called "Big in the Body, Small in the Mind" reviewed by The Duff Guide to Ska here), The Selecter transform Amy Winehouse's Brill Building-y "Back to Black" into a sensational, brisk-paced ska cut. For those not familiar with the song (and I'll admit that I wasn't, but should have been), it's about a woman who is devastated after her man leaves her for an old girlfriend: "We only said goodbye with words/I died a hundred times/You go back to her/And I go back to black." Her life is drained of color, purpose, and joy without him in it. She's left dead inside.

Pauline's impassioned performance definitely packs an emotional wallop (particularly compared with Ms. Winehouse's resigned-to-her-fate original), though it's strangely incongruous with her fiercely independent public persona. I can't imagine Pauline ever in such a lopsided relationship (she's certainly not the "Perils of Pauline" damsel in distress needing a man to save her or validate her self-worth--if anything, he should be worried that she'll kick his ass). It's also in stark contrast with the righteous indignation she unleashes on the anti-fascist beatdown of "Big in the Body, Small in the Mind." (Whether on purpose or not, there's a nice synergy/play on words at work here between Pauline's surname, the title of this song, and the title of her new autobiography, "Black by Design.")

Some (the detractors and doubters) may want to raise the alarm that both tracks on this single are covers. Having heard several other cuts off their forthcoming album, Made in Britain (to be released on September 1, 2011), I can attest that it's certainly not for lack of original and/or strong material. One can deduce why each cover was chosen: "Big in the Body..." re-affirms the wonderful 2 Tone tradition of promoting racial harmony (a message that far too many people still need to receive these days), while "Back to Black" is simply a fantastic song that will be instantly familiar and appealing to both ska and non-ska fans alike. These are the teasers to re-introduce you to the band and remind you why you love Pauline, Gaps and The Selecter in the first place...there is much more goodness to come.

Soon come: The Duff Guide to Ska interview with Pauline Black, as well as an advance look at The Selecter's new album, Made in Britain.

Update:In light of Amy Winehouse's death, The Selecter cancel the digital release of their cover of "Back to Black." (The track will be included in their forthcoming album, Made in Britain, and can be found on the "Big in the Body, Small in the Mind" vinyl single.)


THE SELECTER HALT DOWNLOAD RELEASE OF BACK TO BLACK COVER

The flip-side of The Selecter’s limited edition double A-side 7” vinyl, “Back To Black”, released on Saturday July 23, was recorded months ago as a tribute to Amy Winehouse’s interest in 2 Tone and as a thank you to the singer for helping to put ska back in the public eye. Pauline Black and The Selecter are shocked and saddened that this so suddenly and so tragically coincided with her untimely death.

In respect and homage to her memory, The Selecter will not be releasing the download version of Back To Black, which was initially due for release on Jul 31.

The other A-side, Big In The Body - Small In The Mind, also turned out to be eerily prescient. A thorough re-working of Woody Guthrie’s All You Fascists Bound To Lose, it sets the Selecter agenda, which notes that racism is still on the rise and on the rise in Europe - a statement sadly vindicated by the horrific events in Norway at the weekend.

Pauline Black and The Selecter’s thoughts go out to the family and friends of Amy Winehouse and those murdered in Norway. Sometimes it’s not good to be in tune with the zeitgeist.

Make sure you find out when the US tour will be when you do your interview. There better be a US tour. I would even fly to LA for her like I did for the Specials!

Thanks. That was one of the questions!

What I think is more interesting is that they covered Amy Winehouse who has covered The Specials! Kind of a full circle sort of deal.

Wow, with Winehouse passing, its like the release of Celebrate the Bullet all over again- The Selecter have have the worse luck with release dates.

RIP Amy Winehouse. It would have been amazing to see what you would have done next musically.

What an eerie coincidence. Beautiful tribute.