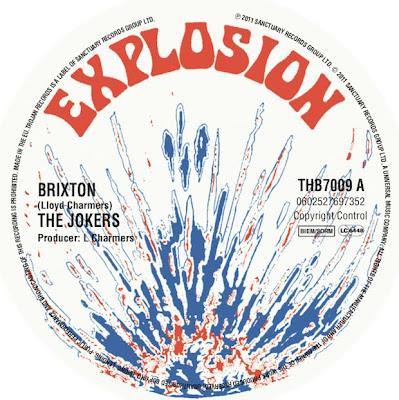 The ninth entry in the Trojan Limited Edition 7" Single series focuses on two rare cuts from ska/reggae singer, songwriter, keyboardist (The Charmers, The Uniques, The Hippy Boys, Lloydie and the Lowbites), and producer (Ken Boothe, Marcia Griffiths), Lloyd "Charmers" Tyrell, best known for the classic "rude reggae" track "Birth Control" (which was later adapted by The Specials for "Too Much Too Young", which--as all 2 Tone fans know--advocates the use of prophylactics, natch).

By 1969, Charmers' productions released on his independent Jamaican label Splash were being licensed in the UK by Pama (and issued on its imprints Nu Beat, Gas and Camel) and Trojan (on the Songbird, Duke and Explosion labels) to help feed the skinhead reggae phenomenon (roughly 1968-1971, when over 20 early reggae singles reached the UK pop charts, including The Upsetters' "Return of Django," Harry J All Stars' "Liquidator," Boris Gardiner's "Elizabethan Reggae," Dave & Ansell Collins' "Double Barrel" and "Monkey Spanner," Desmond Dekker's "Israelites" and "It Mek," Max Romeo's "Wet Dream," The Pioneers' "Long Shot (Kick De Bucket)," Bob & Marcia's "Young, Gifted, and Black" and "Pied Piper," the Melodians' "Sweet Sensation" and Nicky Thomas' "Love of the Common People"; it should also be noted that Laurel Aitken was enormously popular during this period, scoring a string of skinhead reggae hits like "Whoppi King," "Haile Selassie," "Landlords and Tenants," "Jesse James," "Skinhead Train," "Rise and Fall of Laurel Aitken," "Fire in Mi Wire," "Pussy Price," and "It's Too Late").

The groovy (and probably slightly naughty) "Brixton," later curiously dubbed "Soul Of England," has a percolating organ line and guitar rhythm that reminds me a bit of Laurel Aitken's awesome "Reggae Popcorn." The vocals alternate between sung and spoken bits (with a Louis Armstrong impression thrown in the mix) that are mostly a string of non-sequitur exhortations like "I love you baby/Like the twilight hour" and "It's nice, ain't it?/Like rice with spice" and "Put all you've got into it, mate!" Whatever is going on here, the feeling that's conveyed is one of good times--and it's very infectious. "The Premesis" (aka "Big Five") is a great propulsive, organ-driven skinhead reggae instrumental typical of the era (think Clancy Eccles, Harry J All Stars, The Upsetters, etc.). Put on either track and watch the dancefloor fill up.

When Trojan says heavyweight vinyl, they're not kidding...this disc is ridiculously and (for vinyl lovers) satisfyingly thick! In this digital age when song files can vanish into the ether with the click of a mouse, it's nice to have your music on something so substantive!

Info regarding other singles released in this series can be found here; next up is "You Are The One" by Romeo & the Emotions b/w "Girls Like Dirt" by Phil Pratt on the Big Shot imprint.

Duff Guide to Ska Grade: A
Posted by Steve from Moon at 2:49 PM

HEAVY INDEED! Ordered the newest one too. Wicked cool

Yeah! I ordered the new one also and have a few of the others. Really nice stuff...