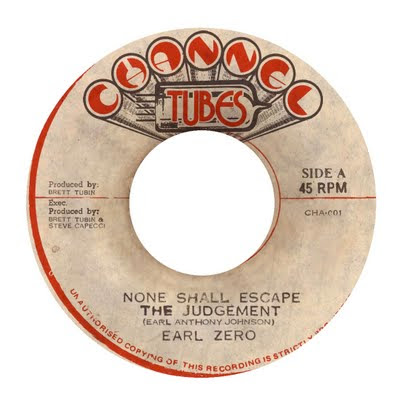 Diligent students of reggae will know of Earl "Zero" Johnson and the cruel twist of fate that was visited upon him early in his career. For those of you not in the know (like me, until I researched him a bit), this story is worth recounting as an example of how brutal and hit-or-miss the music business can be.

In 1975, producer Bunny Lee came across Earl Zero performing his self-penned song "None Shall Escape the Judgement" and had him cut a recording of it at Treasure Isle. The record was given a limited release and for whatever reason went nowhere. Sensing that this song deserved to be a hit, Lee took another stab at it and had newcomer Johnny Clarke record new vocals--and the track went on to become the biggest selling single in Jamaica in 1975, launching Clarke into superstardom and establishing the track as a roots classic. To make matters worse for Zero, he (mistakenly) wasn't given writing credit on the label (which went to Clarke), so many people never realized he had created this massive hit. (Zero did score a hit later that year with "Righteous Works," which kick started his career...)

Zero re-recorded "None Shall Escape the Judgement" several times over the years (a few examples of which can be found on the albums Visions of Love from 1980, as well as And God Said to Man from 2010--both of which are available from Ernie B's Reggae), but to this listener none of these quite captures the Revelations end-of-days urgency and dread--as well as the bliss of deliverance--as this new version produced by Brett Tubin.

Tubin recruited a stellar band to record the new rhythm track (with Eddie Ocampo on drums, Steve Capecci on bass, Victor "Ticklah" Axelrod on keys, Andy Bassford on lead guitar, and Brett himself on rhythm guitar) and arranged for Zero to lay down new vocals. The results are phenomenal. The mega-tight performances, brisk tempo, and almost militant tone perfectly reflect the song's lyrical content (particularly compared with several previous versions which didn't convey the dire warning of the song: soon Jah is sending the four horsemen of the apocalypse to mete out justice to the evildoers in Babylon...so repent now). This very well may turn out to be the definitive version of this song and honors Earl Zero's musical legacy extraordinarily well.

Duff Guide to Ska Grade: A
Posted by Steve from Moon at 9:23 AM