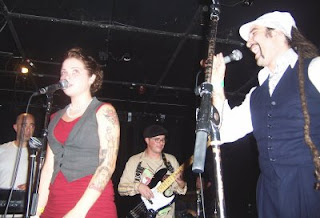 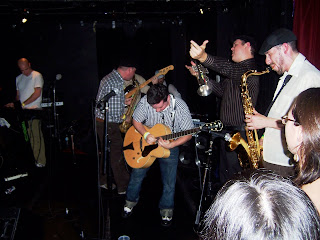 Had I been a more diligent blogger, this post would be more of a show review (and I would have ended up actually seeing more of the bands that played last night). Seriously, I had the best of intentions...I brought my mini-tape recorder for interviews and my digital camera to capture some bands in action! Instead of making our way from floor to floor, catching some of the acts that I've been meaning to see, Adam and I spent most of the night in the sub-basement--with all the ska merch tables (hey, Mr. Keyboard player from Westbound Train who sold me the cool Rasta colors belt for $5, I asked for the one with the Lion of Judah buckle not the plain one!), the DJ (who was spinning a surprising amount of Clash and Yellowman & Fathead), and an easily accessible barkeep--chatting with a lot of peeps from my Moon Records daze that I haven't seen in far too many years. And at some point late in the night, I ended up behind the Megalith merch table, digging around in the semi-darkness for size medium Toasters shirts in the Rubbermaid bins and pushing the RiceRokit "Hang Loose" CD on anyone within earshot (Kendo, I sold a bunch, dude!), while Megalith man Jeremy Patton hit the head (Bucket told me that Jeremy was the "new me," i.e.: he is at Megalith what I was at Moon). Weird piece of trivia: we figured out last night that Jeremy was the first person to purchase some songs from my old digital-download only label, 7 Wonders of the World Music.

What I can report is that there were about 800+ fans in attendance, and Adam and I managed to catch most of Void Union's set in one of the smaller rooms (after trying to see the Hub City Stompers--who sounded great, btw--in the jammed mainstage space). I'm happy to report that Void Union put on a fantastic live show, with a good mix of vintage-ska style original instrumentals (like "The Long Road") and songs featuring the guest singer Hayley Jane (pictured in the top picture, with a cool Betty Grable tattoo on her arm), who is a really gifted frontwoman, and drummer Jesse Hayes (also pictured in the top photo). I'm working on a review of their debut CD, which I'll post in the near future...

Thanks to Buck for getting us in the club and Shay for the hospitality!
Posted by Steve from Moon at 9:54 AM

I had a blast. It was surreal (in a good way) to see so many old acquaintances and catch up.

Finding myself selling merch again (and irritating customers with drunken insults regarding their lack of appreciation for Rush) was like stepping into a time warp.

Many thanks to Buck and Shay, and also huge ups to Jeremy for the excellent company. And it goes without saying that it rocked (as usual) to hang out with the Duff Man.

Seriously, it was a blast to be out on the town with ya. Props to the J-Man, too, for doing all that he does...and I forgot to get a picture of his dope mustache!

A THOUSAND THANKS for big-pimping our discs, braddah!!!

Between you and Jeremy (and of course 'El Jefe' Bucket) so generously and loyally supporting our cause, all of us in TeamRokit sincerely feel TRULY BLESSED and IMMEASURABLY GRATEFUL for such tremendous support!!!

ALL HAIL THE DUFF GUIDE!!!

Next, I'm going to show up at ska fans' apartments throughout NYC to play your CD in their living rooms!

The Duff Guide appreciates your comments, as always!

hey adam, i was the kid at the merch table who you pushed ricerokit on then discussed rush with, then "forced" me to finally buy ram di dance. haha

i loved the ricetokit by the way. ive listened to it almost every day since that show.