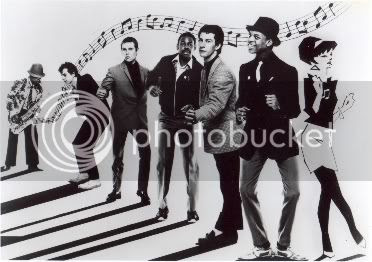 Seeing President-elect Barack Obama and his family on stage in Chicago on election night as they embraced Vice-President-elect Joe Biden and his family was such an extraordinarily powerful image, as was the wonderfully multiracial crown in Grant Park--images that are not seen nearly enough in the media and pop culture in the United States.

And it reminded me of the daring symbolism of so many of the 2-Tone era bands (particularly The Specials, The Beat, The Selecter), who promoted tolerance and racial harmony/unity simply by hitting the stage and playing music together, during a time in the UK when the National Front was on the rise and violent attacks on non-whites (Brits and immigrants alike) were commonplace. We've come a long way since 1979, but I still remember reading an interview Bucket did in the late 90s talking about how it was still a strong and provocative statement for the multiracial Toasters to perform in certain parts of the USA...

In high school, I caught onto ska music just after 2-Tone collapsed, as the surviving bands were expanding their sound (see The English Beat's Special Beat Service and the Special AKA's "Free Nelson Mandela") and I worked my way back to the proper 2-Tone albums, as well as some vintage ska from The Skatalites and Prince Buster. The music drew me in immediately, but the image of these integrated bands (including UB40, whom I saw live many times) influenced me enormously, too (particularly, since most of the British New Wave acts I was into were lily white). Growing up, my parents had taught me the evils of racism (they had been actively involved in the Civil Rights movement in the 60s), so it wasn't like I needed this lesson, but it was cool to have these values that I strongly believed in reinforced and celebrated in the pop culture I happily consumed every day.

I've heard a lot of pundits opine that Obama "transcends race," as if white Americans who support him are oblivous to race. (The subtext is that the only way white folks could vote for Obama is by denying his ethnicity completely--that, or he somehow tricked us with all his fancy words and smooth talk!) C'mon! Obama is a BLACK American and he is embraced by his fellow Americans (white, black, brown, etc.) for the totality of who he is--the content of his character, the depth of his intellect, as well as the color of his skin. We know he is black and we're okay with that. Obama is different from some of us, but we're not afraid of "the other one" as McCain so demeaningly referred to Obama in one of the debates. Diversity doesn't scare us because we know better: we're a stronger, smarter, and healthier nation for it.

One of the overt goals of 2-Tone was to normalize racial integration--black and white people making music together was no big thang, so we all should be able to live, work, and play together! And a lot of us got the message and incorporated it into our lives. Now, with the election of Barack Obama, my kids and generations of kids to follow, will find it perfectly normal for a black man to be the President of the United States (and will see him on TV, hear about him from their parents, and read about him in newspapers, magazines, blogs, and in their history books)--an extraordinary development for a country founded on the principals of freedom and equality (We hold these truths to be self-evident, that all men are created equal, that they are endowed by their Creator with certain unalienable Rights, that among these are Life, Liberty and the pursuit of Happiness...), so long retarded in its evolution by its long and ugly history of slavery, institutionalized racism, and pigheaded ignorance. Obama will serve as our kids' 2-Tone image and message (hey, he's literally 2-Tone!), one that's very much overdue.

Our society has finally caught up with our ideals (okay, we're not perfect yet, but we're working on it). I've never been prouder of my country or happier to be an American.
Posted by Steve from Moon at 10:45 PM

Well actually Obama is HALF black, his mother is white and his father is from Kenya. Obama was born in Hawaii, so that's what allows him to be president because he was born a US citizen. BUT, what makes it better is that he can actually say he is AFRICAN AMERICAN. Being a direct descendant from someone from Africa. There are many "black" people, including some of my best friends, that REFUSE to use the word AFRICAN American, because they actually have no known traceable African roots.
It would be one things for average black Joe to become US President, it's more amazing that he is 1/2 African!
If only we could get him to catch on to ska music and maybe make some certain band the official Democratic band? hmmm who could that be!?! :)

the one with jon mccain drumming for them?

Anonymous: Actually, I think it could be a certain band whose main member is from Hawaii and is biracial, too.

Jeremy: I LOVE that Obama has such a strong connection to Africa...it gives the US a connection to the outside (and thrird) world that we've never experienced...

All kinds of cool things can happen when we elect non-white presidents...

Another huge pop culture influence on me regarding racial harmony/equality was the original Star Trek. I watched those re-runs obsessively (as well as the cartoon version) throughout the 70s as a young kid. Didn't want to admit it because its kind of dorky...

I think Jeremy must be talking about the much more dignified and respected TOASTERS, who certainly more clearly and nobly represent the classic sense of 2-tone.

While I myself may also be considered another shade of 2-tone as well, and though Uncle Barack and I have shared many a 'SPAM musubi' at the beach between surf sessions in Waikiki--I do believe the Democratic party may however, find RiceRokit's politics slightly MILITANT and radical for their tastes...

I mean, unless they want a band singing about how elections are bought and paid for, that we should be ARMING ourselves for revolution, and that the "donut of the proletariat should be dunked in the blood of the master class," they might want to possibly distance themselves from such sentiments...

Of course, we're thrilled for such a historical and ground-breaking CHANGE, and sincerely hope it leads to more of the same--plus it IS pretty cool that a Hawaiian-born 'kama'aina' gets to jet in Airforce 1 now, yeah? ALOOOOOOOOHA!!!