2012: The Year in Ska - Marc Wasserman (Bigger Thomas/Marco on the Bass)


Editor's Note: As the end of the calendar year sneaks up on me--as it always does, since the fall is always so damn busy!--I always scramble around to put together my "best of" lists of the ska singles, albums, reissues, books, etc. that I really enjoyed over the past year and want to highlight for all the ska fans out there. But I also thought it might be interesting to feature some other opinions, so I approached a diverse group of ska musicians, bloggers, DJs, and label heads to find out what their favorite ska things were in 2012. And thus the "2012: The Year in Ska" series was born! Thanks to everyone who is taking the time to participate--I really appreciate it! 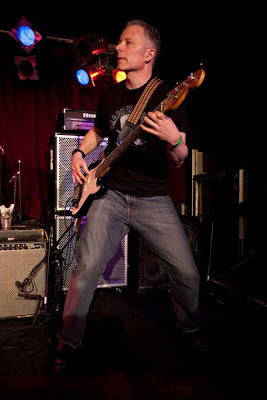 My friend Marc Wasserman is the bass player and one of the songwriters for the 2 Tone-influenced NYC act Bigger Thomas (one of my favorite bands). He also is the man behind the excellent Marco on the Bass blog, which celebrates the 2 Tone era, as well as 80s ska bands in the USA--and he's my co-conspirator in booking and promoting our monthly Electric Avenue ska/reggae nights at Characters NYC.

2012: The Year in Ska - Marc Wasserman/Bigger Thomas/Marco on the Bass

1) The UltraInfidels EP - Chris Dowd appears to be a man possessed with the musical spirit again. Nearly a decade out of the musical limelight, the ex-Fishbone singer, keyboardist, and trombonist is back with a new ska band, The UltraInfidels. The band's new six-song EP is dynamic, diverse (he has dubbed the band's sound as The Specials meets Yes and Metalica), thoughtful, intelligent, and incredibly danceable. Even better, Dowd isn't shying away from embracing his Fishbone roots or his love of ska. One song in particular, "Cubicle," could have come from Fishbone's frenetic first EP originally released in 1985. It chronicles Dowd's time when he had a straight, 9 to 5 job. It moves from hyper ska to a Beatles-like psychedelic bridge that reveals Dowd's self-awareness. The emotionally soulful "Time Ain't Long" (like many of the best tracks from Fishbone's classic Truth and Soul) celebrates life while noting its impermanence and the difficult but essential lessons it offers us as we travel from youth to middle age.

2) The Skints - The mean streets of London have proved to be a fertile breeding ground for gritty ska and reggae songs for many years. The Clash, Madness, The King Blues, and now The Skints have emerged from the city armed with bittersweet tales about surviving in the rough and tough neighborhoods across the English capital. While reminiscing about his roots in one of these neighborhoods on "Rise Up," vocalist Joshua Walters Rudge warns of the dangers of growing up there on "Live East Die Young." His lightning-quick cockney chat is complemented by the sublime vocals of Marcia Richards, particularly on the excellent "Ratatat." This is a modern-day dub, ska, reggae, and hip hop-inspired classic and The Skints could be the 21st century version of The Specials we have all been waiting for.

3) The Frightnrs EP - I found myself listening to this brilliant six-song EP of authentic rub-a-dub reggae from the Brooklyn-based band a lot this year. The songs have a timeless quality and the band have done a fantastic job of recreating the rockers phase of early 70's reggae to a 't,' drawing influences and inspiration from Alton Ellis, Horace Andy, and Sugar Minott. It's clear that the band members live, breathe, and love early dancehall, 70's reggae, and rocksteady. This devotion shines through, making this an absolute must listen for all fans of reggae and ska.

4) Tim Timebomb and Friends - Tim Armstrong from Rancid remains a musical force to be reckoned. I also love that he is a music fan at heart. His latest project is to record and post some of his favorite cover songs including an incredibly diverse mix of ska, country, rockabilly, and rock songs that have particular meaning for Armstrong. He took a crack a number of 2 Tone-era covers, but his best may be his acoustic cover of The Beat's "Save It For Later," which gets to core of the song's bittersweet center, and his emotional and moving rocksteady take on The Faces "Ohh La La" may one his best songs ever.


5) Phoenix City All-Stars Two Tone Gone Ska - This inspired and unbeatable collection of mostly instrumental versions of classic 2 Tone tracks that you know and love so well have been taken back to the future from whence they came -- namely 1960s Jamaica. Each song sounds like it was recorded in a small, 4-track circa 60s Kingston studio. The inclusion of legendary guest vocalists Dave Barker (the voice of Dave and Ansell Collins) on Elvis Costello's "I Can't Stand Up For Falling Down" and AJ Franklin (The Federals and The Chosen Few) on Smokey Robinson and The Miracles/The Beat's "Tears Of A Clown" complete the musical circle.

I'm a t-shirt freak! So, I always try and pick up shirts for the many bands I see or my band Bigger Thomas plays with. It's also a great way to get some cash into the hands of bands who are getting paid a lot less than you think! I was finally able to grab a classic Beat Girl t-shirt at a show we played with The English Beat this summer which replaces the shredded original I had from 1982. I also got a classic Clash t-shirt (showing my age and roots here!).

1) Missing the 2012 London International Ska Festival was a huge regret. My band Bigger Thomas was in the running for a fan vote to pick one band to perform at the festival. We finished in the top three, but we were disappointed to miss playing. I plan to attend the 2013 version as a fan!

2) For a lot of very personal and emotional reasons, I was very sad to miss the Rocks Off Halloween Boat Party with Mephiskapheles, Inspecter 7, and Step2Far at the end of October.

3) Hurricane Sandy ruined my debut as a DJ alongside DJ Duff at the The Toasters show at the Knitting Factory in early November. The good news was the show went on and Chuck Zilla and Maddie Ruthless filled in.

4) Missing Lee Perry's show at the Gramercy Theatre here in NYC, which is a short bus ride from my apartment. I'm kicking myself for not going to see a reggae legend. Still have to see him live.

5) Letting a little rain dissuade me from going to see Jimmy Cliff kick off his U.S. tour in Prospect Park in Brooklyn.

1) I have high hopes for the Electric Avenue ska and reggae shows I co-book and co-promote with Steve Shafer of The Duff Guide To Ska. I think we are making progress on establishing a monthly destination in Manhattan for ska fans to come and check out the very best bands from all over the U.S.

2) My band Bigger Thomas is celebrating out 25th anniversary in 2013 and we are planning to release an EP of new music. I hope we can play out a lot more in 2013 to mark our 25 years of playing ska and that we can finally record more of the songs we have written.

3) To be part of the backing band for King Hammond on his U.S. tour in November 2013. It would be a real honor to learn some of my favorite King Hammond songs and to play live with him.