Ska is Dead Young Guns 2011 Tour with We are the Union, The Forthrights, and more! 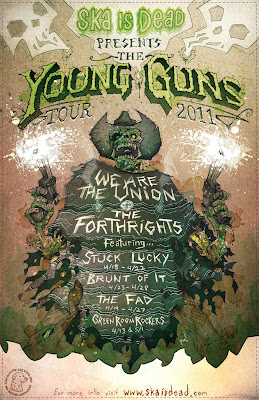 The latest project from the decaying minds of the Ska is Dead peeps comes this spring (if winter ever ends, that is) with The Young Guns 2011 Tour--featuring some of the best, new(ish) American ska bands on the scene--with Detroit’s We Are the Union and New York City’s The Forthrights as co-headliners. Supporting bands along the way include Nashville's Stuck Lucky (4/15-4/22), Boston's Brunt of It (4/23-4/28), Long Island’s The Fad (4/19-4/27), and Indiana's Green Room Rockers (4/13 & 5/1) among others.

On a selfish note, I'm a bit bummed that this tour doesn't actually hit any of New York City's five boroughs...I gotta go to the 'burbs?!? I spent the first 18 years of my life trying to escape them!
Posted by Steve from Moon at 4:58 PM

Email ThisBlogThis!Share to TwitterShare to FacebookShare to Pinterest
Labels: Brunt of It, Green Room Rockers, Ska is Dead Tour, Stuck Lucky, The Fad, The Forthrights, We Are the Union

Never heard of these bands.

Adam--you need to come out to shows with me more often! I know most of these bands and they are pretty terrific...

Stirring up the pot, as usual!

You're lucky. This ain't coming to CA!

Maybe there will be a second, West Coast leg of this tour later in the year?

Expect to see The Forthrights on the west cost this year. WATU will be recording a new record after this tour ends. Bong Island is da bomb, Royal City Riot & The Beatdown are on 4/22 date as well. Ska is Dread, big up Mustard Plug, WATU, Community Records and all the fans who will make this tour a blast!

Thanks for the update, Jimmy D!

Quit your whining Steve! We come into NYC all the time. You can make a trip out to Long Island/Asbury. haha

I know...but I can't have some beers and then catch the subway home...you gotta drive to these places.

You can't catch a train on the LIRR for Bethpage and Garden City shows?