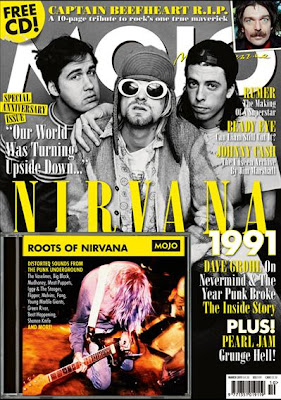 The March 2011 issue of MOJO with Nirvana on the cover (hard to believe that all that grunge hoopla was 20 years ago--I was a young man with no big plans back then) has several items that will be of interest to ska and reggae fans.

Keyboardist Glen Adams' passing is noted in a detailed obituary by reggae expert Dave Katz (for instance, I now know that Adams worked with Jump with Joey, something that I don't think ever registered in my mind). Katz also reviews and raves about the latest re-issue compilation from Rock-A-Shacka, You'll Never Know: 18 Caribou Ska Selections (featuring early 60s ska cuts by Laurel Aitken, Rico, Lord Tanamo, Don Drummond and more, produced by Indian-Jamaican businessman Dada Tewari and released on his Caribou label).

Also in this issue, Ian Harrison brings our attention to the re-issue of Culture's apocalyptic Two Sevens Clash on vinyl (from VP Records), while the Laurel Aitken Everybody Ska! Rudi Got Married, 1980-1992 comp (Pressure Drop) receives a one-paragraph mention in the "Reissues Extra" section (though we think it deserves much more--check out the extensive Duff Guide to Ska review of Laurel's 2 Tone and early 3rd wave output here).
Posted by Steve from Moon at 3:30 AM