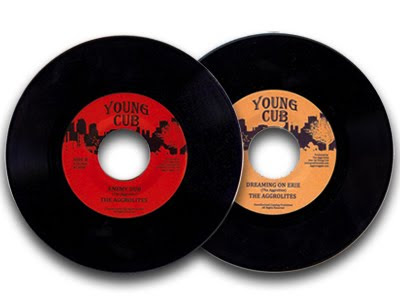 On the yellow label 45, "Dreaming on Erie" is a warm, shimmering guitar-focused instrumental that strikes one as being more about a pined for or lost love than the Emerald Isle (but then again, I've never had the pleasure of traveling there). While on its face, the mysteriously titled "Eye of Orbaras" might suggest a "Far East," melodica-driven sound, it actually sports a jaunty ice rink organ on this Upsetters-ish cut.

Switching over to the red label single, "Trial and Error" is a lover's rock versioning of the Lee "Scratch" Perry/Junior Murvin classic "Police and Thieves" (complete with falsetto vocals and awesome Black Ark growling effects!) that offers some reassuring support: "At times you may have your doubts/But through trial and error/You'll found a way to work things out." "Enemy Dub" is wonderfully smooth roots reggae that conjures up images of a night trek across the Sahara or Sinai desert--and opens with vocals beseeching God/Jah (shades of Moses here) for guidance through the wilderness and protection from foes.

If you'll forgive me for trading on the Old Testament theme, these two singles should be received like manna from heaven by the ska and reggae faithful trying to survive in a pop music wasteland. It's tasty and sustaining music, indeed.

The Aggrolites' Rugged Road LP will be released on February 22, 2011, while the CD will see light of day on March 22, 2011 (both are available directly from Young Cub Records).
Posted by Steve from Moon at 1:11 PM