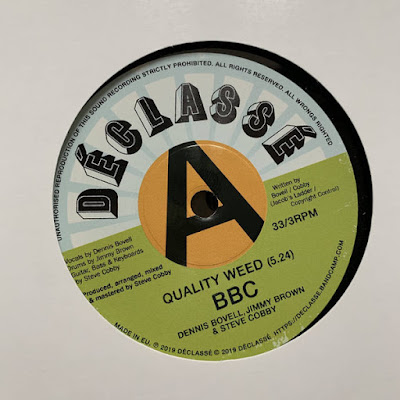 "Quality Weed" (7" vinyl single, Declasse Records, 2019) is a terrific,  amusing, pro-pot cut borne of a collaboration between Dennis Bovell (Blackbeard, Matumbi, The 4th Street Orchestra), Jimmy Brown (UB40), and Steve Cobby (DJ/producer, Fila Brazilia, The Solid Doctor). The lyrics, sung by Bovell with his almost impossibly deep voice, pretty much sum up the proceedings: "Take my advice now, now hear ye this/There's nothing wrong with cannabis/Set yourself free whenever you wanna/Avail yourself of some marijuana/Select the buds and plant the seeds/To be sure that you're partaking of quality weed..." 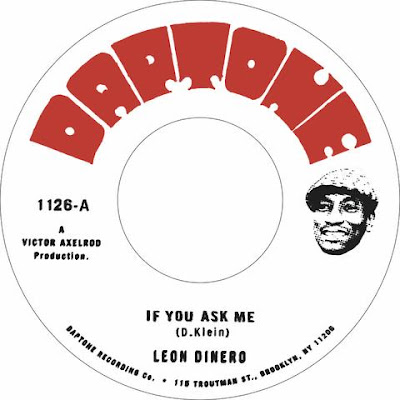 The track is presented in two versions, a traditional, dubby roots reggae take and a house remix on the flip side (that manages to retain its reggae flavor through the bass line and brass). With its cranked up BPM and additional percussive touches, the house version--unsurprisingly--has more life to it and is actually the better of the two. Essential for Bovell completists like this reviewer; diversionary fun for everyone else.

This is the second Daptone single from singer Leon Dinero and producer Victor Axelrod (upon first hearing his debut from earlier this year--"Lover Like Me" b/w "Conscious is Heavy"-- you'd swear it was a lost '60s Skatalites/Jackie Mittoo 45 recovered from Studio One's vaults--it's superb). "If You Ask Me" (7" vinyl single, Daptone Records, 2019) is one of the late Dan Klein's sweet rocksteady compositions that was considered for The Frightnrs debut LP back in 2016, but put aside in favor of other material. Dinero, backed by the remaining Frightnrs, does this lovely, pleading love song justice ("If you ask me to/I would be the very best me I could be...") and this cut reminds the listener, once again, of Klein's considerable songwriting gifts. "Bandits" features Screechy Dan on the mic decrying the predatory and racist policy of allowing the gentrification of large swathes of Brooklyn by greedy landlords/real estate developers (with tacit approval from the city) and the resulting mass displacement of poor/working class people of color (from neighborhoods where they've lived for decades) over the boss "If You Ask Me" instrumental track: "From Bed Stuy to Crown Heights to Flatbush/Fort Greene, Clinton Hill, down to Red Hook/It's like bandits come in/Have the place shook/While we look as our culture get ambushed..." Like all truly great and catchy protest songs, "Bandits" moves both your body and conscience (that is, if you have one).

Love the BBC single! All versions are top notch...