Interview with Masaya Hayashi of Drum and Bass Records and Rock A Shacka! 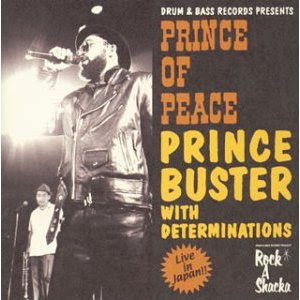 There is a fantastic interview with Masaya Hayashi, the founder and owner of Japan's Drum & Bass Records (quite possibly the premier source for vintage Jamaican vinyl in the world) and the Rock A Shacka re-issue label, on PartyXtraz.com (a Jamaican entertainment scene blog). This is a must-read for anyone interested in the origins of this store and label--and/or wants some insight into the Japanese ska and reggae scene.

In 2003, I was lucky to pick up an import copy of Prince of Peace, the live CD featuring Prince Buster and The Determinations, as well as several other subsequent Rock A Shacka compilations of rare Prince Buster singles and productions (Voice of the People and Dance Cleopatra)--but these are hard to come by now.

Several recent Rock A Shacka releases (such as Orange Street Special, Fabulous Songs of Miss Sonia E. Pottinger Volume 2 and Alton Ellis Soul Train is Coming) have been available through Amazon and Dusty Groove America in the US, and Copasetic Mailorder in Germany. I haven't heard it yet, but Rock A Shacka just released Rock A Shacka Volume 19: You'll Never Know: Caribou Ska Selection, that contains some rare early ska from Laurel Aitken, Don Drummond, Rico, The Mighty Vikings, Lord Tanamo, and more.
Posted by Steve from Moon at 12:45 AM