Calling All Rude Boys and Rude Girls! King Hammond at The Lake This Saturday Night! 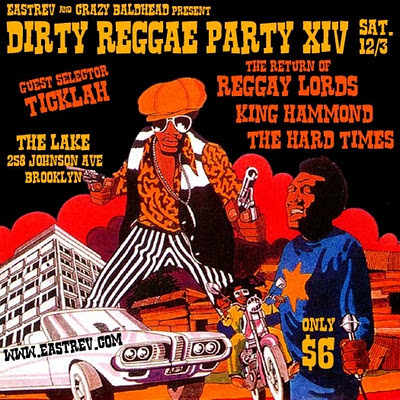 Dirty Reggae Party #14 at The Lake with King Hammond, The Hard Times, The Reggay Lords (plus Ticklah on the decks!)

(Take the L train to Montrose, walk down Bushwick and make a left on Johnson--or take the J train to Flushing, walk towards Bushwick Avenue, make a left, and walk till you hit Johnson Avenue and make a right. Look for the metal door with '258' on it, open it, and go up the stairs...)

King Hammond will be selling CDs of his three recent releases (The King and I, Jacuzzi, and Showbiz--click on the links for The Duff Guide to Ska reviews), as well as vinyl copies of his EPs ("Riot in London Town" and "Hey, Mr. DJ")--so bring some extra cash to buy 'em (or cut down on the beers!). Did I mention that he's got old skool King Hammond badges, too?!

For those of you who missed King Hammond's killer set at Shrine last night (he was backed by The Hard Times), here are two videos I shot of his performance. The first is "Rocking on Ridley Road" followed by "Hanky Panky."