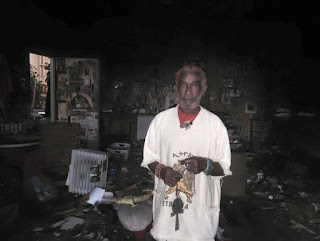 The BBC and other outlets (NME, AV Club, etc.) report that Lee "Scratch" Perry accidentally burnt down his home recording studio in Switzerland last week after he left a candle unattended in his "secret lab." (You may recall that Perry his legendary Black Ark studio in Kingston, JA also was destroyed by an intentional or accidental fire in 1979.) Tragically, Perry lost his "life collections" of studio equipment, recordings, books, outfits, and other materials and memorabilia related to his long and incredible career as a performer and producer.

CBC Radio has a terrific interview with Mirielle Perry and Lee Perry from a day after the fire that's very much worth reading (from what she says about Perry's behavior with electrical wires and potentially combustable materials, it's surprising that he doesn't start more fires!), as well as Lee "Scratch" Perry's original Facebook post announcing the destruction of his studio (where he offers to put his fans on the guest list of his shows in exchange for putting together the "magic hats" and "special outfits" that he wears during his performances--all the old ones all went up in flames).