In Remembrance: John "Brad" Bradbury of The Specials 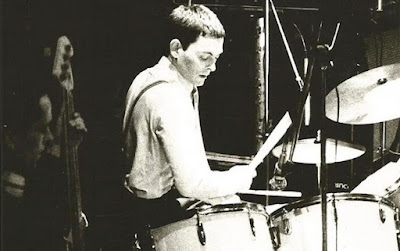 Since he appeared on both the label's first (The Special AKA "Gangsters" b/w The Selecter "The Selecter" in 1979) and last singles (the J.B's Allstars socialist view of/support for teachers and uniformly effective public education, "The Alphabet Army" in 1986), ska drummer, songwriter, and producer extraordinaire John "Prince Rimshot" Bradbury could be considered as the alpha and omega of 2 Tone--and he went on to keep the faith with ska music up to his very end, many decades after 2 Tone had closed up shop.

In the late 70s (read about his pre-Specials life in the Guardian's excellent obituary; take note that his mother was fiercely anti-racist and pro-immigrant), Bradbury traveled in the Coventry music circles of both Neol Davies and Jerry Dammers--he was the drummer for Davies' The Transposed Men (which contained another future Selecter, Desmond Brown) and was a housemate of Dammers'. When The Specials' first drummer Silverton Hutchinson quit the band, Dammers (who had some reservations that were overridden by Specials' rhythm guitarist Lynval Golding) recruited Bradbury to The Specials and they soon recorded their first song "Gangsters" with Bradbury behind the kit (along with early versions of "Nite Klub" and "Too Much Too Young" that the band didn't think were in any shape to be released). With their borrowed recording funds exhausted and without a flip side for "Gangsters," Dammers approached friend Neol Davies, who--months earlier--had recorded a demo instrumental track he had written with Bradbury (initially titled "Kingston Affair"), which had been produced by Roger Lomas with Bradbury on drums and Barry Jones on trombone. The track was renamed "The Selecter" (by a then non-existent band called The Selecter) and pressed up as part of the first double A-sided split single from the pre-Chrysalis 2 Tone Records--which ignited the feverish late 70s ska craze in the UK (and forced Davies to quickly assemble his new band).

Bradbury, of course, quickly settled in and served as the brilliant, crisply precise, and wonderfully versatile propulsive force--the heartbeat--that gave life to all of The Specials' incredible songs (for reminders of Bradbury's fantastic drumming skills, check out "Too Much Too Young," "Nite Klub," "Blank Expression," or "Man at C and A") on their two albums, related singles, and two EPs, which continue to captivate and inspire legions of ska fans and musicians worldwide to this very day. According to Specials' bassist Horace Panter in his book "Ska'd for Life," "Brad had the reggae groove down. With the exception of Jim Brown from UB40, I don't know of any other white drummer who could get that authentic feel. He didn't just play reggae, he could change tempo seamlessly from a 'one-drop' reggae beat to a 'four-on-the-floor' rock section, as can be heard on 'It's Up to You'..." (which Bradbury helped co-write, along with "Nite Klub" and "Blank Expression.") He set the bar very high for all 2 Tone-influenced drummers to come...

After The Specials disintegrated in 1981, Bradbury followed Dammers into the next iteration of the band--The Special AKA--and co-wrote several songs ("Bright Lights," "Housebound," and "Break Down the Door") on their amazing reggae/no-wave jazz/soul-filled In the Studio LP. During this period, Bradbury also explored his love of Northern Soul (previously revealed via The Specials' cover of "Sock It To 'Em, J.B!" on More Specials, which he produced) by forming his own soul group, J.B's Allstars that signed with RCA Victor and released four singles on that label--the final, fifth one on 2 Tone.

(In the early 80s, Bradbury also founded his own short-lived label, Race Records, which released five reggae and soul singles, including one from The People, which featured a post-Selecter Charley Anderson and Desmond Brown.)

As the first (white hot) post-2 Tone UK ska scene (The Trojans, Potato 5, Laurel Aitken, Bad Manners, The Deltones, The Hotknives, The Riffs, The Forest Hillbillies, etc.) emerged in the late 80s, Bradbury was drafted to produce key albums for The Loafers (Contagious) and Maroon Town (High and Dry).

In the early 90s, Bradbury was presuaded to assemble an all-star 2 Tone road band after an encounter with Ian Copeland (brother of Stewart of The Police and Miles of IRS Records), owner of Frontier Booking International. Copeland had told Bradbury how the US ska scene (particularly in Southern California) was on the verge of (finally) breaking big and that a touring 2 Tone act would be very enthusiastically received (much more than any of these bands had experienced during their challenging visits to the USA in the early 80s). The result was The Special Beat (comprised, at various points, of Bradbury, Horace Panter, Lynval Golding, Neville Staple, Ranking Roger, Saxa, The Loafers' Sean Flowerdew, and others), which performed--obviously--Specials and Beat hits and embarked on several massively successful tours of the US (including the groundbreaking 1993 Skavoovee Tour with The Skatalites, The Selecter, and The Toasters) and Japan. When the Special Beat had run its course, Bradbury drummed for a few years for a version of The Selecter (with Pauline Black, Arthur "Gaps" Hendrickson, and Nick Welsh of Bad Manners and King Hammond fame), as well as Welsh's and Jennie (Belle Stars) Matthais's Big 5.

During the late 1990s and much of the 2000s--up until The Specials reformed with all members except Jerry Dammers in 2008 to perform at Bestival (billed as Terry Hall and Friends)--Bradbury worked on computers as an information technology (IT) specialist. The Bestival appearance (and their reception from the fans) convinced all involved to make a go of it again for a series of sold-out 30th anniversary reunion dates in 2009 in the UK, Japan, and Australia. Bradbury eagerly participated in every highly successful Specials reunion tour (that followed in 2011, 2013, and 2015), which brought the band to venues and festivals in the UK, US, Europe, Japan, Mexico, and Chile. At a recent BBC 6 Music songwriter's panel in Birmingham on December 7, 2016, Terry Hall was quoted as stating that The Specials were planning to tour the US and UK in 2016 with new material.

My sincere condolences go out to Bradbury's family, friends, and fans.

(This post was greatly informed by selections from Paul "Willo" Williams' biography of The Specials, "You're Wondering Now: The Specials from Conception to Reunion." Thanks to the author for this invaluable resource on the band.)