Preview of New Album from J. Navarro and The Traitors 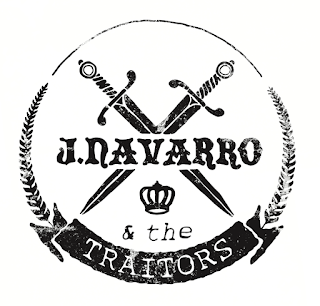 Jay Navarro (of The Suicide Machines) and Eric Abbey (of 1592) have joined musical forces to bring back a sharp 2 Tone/punky-reggae Clash sound they feel is missing from the Detroit scene in the form of J. Navarro and the Traitors. Their debut album Criminals and Lions--mixed by Agent Jay (Slackers/Crazy Baldhead)--will be released on Asbestos Records at some point early in the new year.


However, you can preview/purchase (name your price!) two tracks off Criminals and Lions from their Bandcamp page now! "Deeper" is a great, hard-driving ska track (that sounds like it could be from King Apparatus' debut album) about seeing beyond the superficial differences that can be used to divide us:

"Water" refers to Detroit's 2014 water crisis, which emerged after the city entered bankruptcy and was placed under the control of an emergency manager (appointed by Michigan's governor). In his search to find revenue for the city's coffers, the manager decided to go after Detroit's poorest black residents--about 40% of this city's population lives in poverty--who were behind on their water bills and turned off their water if they couldn't pay. This prompted the United Nations to issue this unusual rebuke: "Disconnection of water services because of failure to pay due to lack of means constitutes a violation of the human right to water and other international human rights." What was particularly galling was the it appeared that the Detroit Water and Sewerage Department wasn't pursing significant, overdue commercial and municipal water bills with as much zeal (and wasn't shutting off their water when payment wasn't forthcoming). After echoing the UN's declaration, "water is a human right--please don't stop the water," J. Navarro and the Traitors' terrifically upbeat track (very appropriately) segues into a spirited ska cover of Toots and Maytals' "Pressure Drop" that simultaneously recognizes and sympathizes with the plight of Detroit's residents, while calling out the powers that be for their inhumane actions:

After hearing these two tracks, I can't wait to hear the rest of the album!

Email ThisBlogThis!Share to TwitterShare to FacebookShare to Pinterest
Labels: 1592, 2 Tone, Agent Jay, J. Navarro and the Traitors, The Clash, The Suicide Machines, Toots and the Maytals