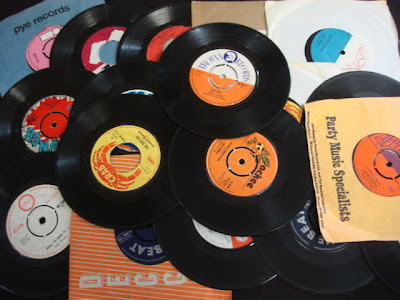 Here's my (hopefully) eagerly-awaited, messy and woefully incomplete Best of Ska/Reggae 7" Singles of 2011 list! I'm sure I've missed some excellent releases this past year due to my limited disposable income, highly-subjective personal tastes, lapses in judgement, or outright cluelessness. But this considerable list contains both new and reissued recordings, all of which are absolutely worth your hard-earned cash--and guaranteed to bring you joy and satisfaction over repeated listens.

Entries that include a hotlink will connect you to The Duff Guide to Ska review of that particular release; otherwise, I've tried to provide a few sentences to give you an idea of why I like that single so much.

- Ken Boothe and Tasty Grooves: "A Change Must Come" b/w "Better Than Nothing" (Liquidator) - This haunting rocksteady cut is the most overtly (and welcome) political single of the year with Ken Boothe decrying what is essentially racial profiling of suspected immigrants (both legal and non-documented) who are then swept up and detained in C.I.E.s (Immigrant Detention Centres that are not considered jails, but function as such) whilst their immigration status is determined. In most countries throughout Europe, the C.I.E.s function in a legally gray area with no guaranteed legal rights for detainees, leaving people jailed for months and subject to abuse--even torture--before they are released or deported. This cut reminds us that people are people, no matter where you come from or the color of your skin--and demands that everyone deserves to be treated with dignity and respect.

- The Ethiopians: "I'm Shocking" b/w "Sign the Cheque" (Trojan Records/Smash) - In a case of unfortunate timing, this single was issued not long after Leonard Dillon's death (it had been in the works long before his passing), but these two rare rocksteady gems (recorded after their debut Engine 54) are wonderful reminders of his extraordinary gifts.

- King Hammond: "Mr. DJ" and "Bongo Ska Fever" b/w "The Loop" and "Dub Movement 1" (N.1. Records) - An incredible EP of booty-shaking ska and skinhead reggae, which also doubles as a mini-sampler of KH's three recent stellar albums (The King and I, Jacuzzi, and Showbiz). The King is at the top of his game!

- Ocean 11: "Miss Understanding" b/w "Spring in Rome" (Moondust Records) - From one of the top--yet somehow elusive (they never played out much beyond SoCal)--traditional ska bands of the 1990s comes the first vinyl appearance of "Miss Understanding," which was originally released on the Girls Go Ska comp from Simmerdown, as well as an unreleased duet with Malik Moore of Los Bullets. I was lucky enough to pick up this single when Queen P played Brooklyn with The Shifters earlier this fall... (Many more terrific releases are soon coming from Moondust--but it looks like they'll be on next year's list!)

- Prince Fatty and Mutant Hi-Fi: "Transistor Cowboy" b/w "Son of a Thousand Fathers" (Mr. Bongo) - From the fantastic Return of the Gringo album filled with spaghetti-Western inspired reggae--part homage to all the "Dollar" sides from Lee "Scratch" Perry and the Upsetters ("Return of Django"), Lloyd Charmers and The Hippy Boys, Derrick Harriot and The Crystalites, Harry J, Clancy Eccles, Joe Gibbs et all, as well as a brilliant contribution to this somewhat obscure musical sub-genre.

- The Selecter: "Big in the Body, Small in the Mind" b/w "Back to Black" (Vocaphone Music)

And the brilliant single that never was (Mad Decent was supposed to release a 7" of this over the summer, but for whatever reason it never came to pass): The Beastie Boys featuring Santigold: "Don't Play No Game That I Can't Win."