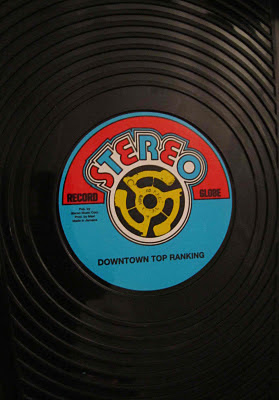 I always get a kick out of discovering instances where a particular music's/band's style or image ends up influencing the look or feel of something completely unrelated (they're borrowing--or some might even say appropriating--the established cool factor for their own purposes). It's a tip of the hat, an homage--or like a good cover of a song. Or, in the case of reggae, like versioning.

My teenage son has been big into longboarding, though he recently found an old banana board (the short skateboard with the plastic deck that many of us had back in the 70s) that someone was throwing out on the street--and he's completely into them now. So, he asked his grandparents for a banana board for Xmas and they ended up getting him a Stereo Vinyl Cruiser.

One of the cool features of this board is that its deck has grooves like an LP and Stereo (the skateboard company co-owned by Jason Lee, who was a professional skateboarder before "Almost Famous" and "My Name is Earl") gives you a bunch of retro-looking stickers to choose from for the center label of your skateboard. The sticker that my son chose was one that mimics the label from Joe Gibbs' release of Althea and Donna's "Uptown Top Ranking." He's not much into reggae (apart from The Clash's version excursions), but the kid knows a good thing when he sees it.

Email ThisBlogThis!Share to TwitterShare to FacebookShare to Pinterest
Labels: Althea and Donna, Joe Gibbs, The Clash