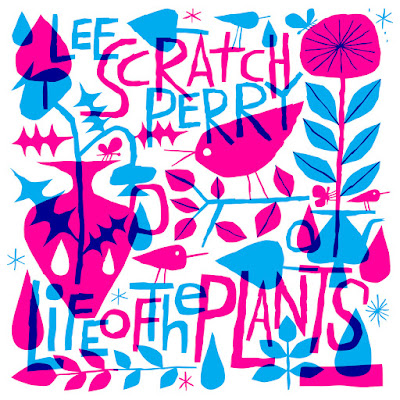 Life of the Plants (12" vinyl EP, Stones Throw Records, 2019), a collaborative effort between Lee "Scratch" Perry, Peaking Lights (AKA Aaron Coyes and Indra Dunis), and Argentinian musician Ivan Lee, is a compelling, modern take on roots reggae (Peaking Lights bills themselves as "electronic dub") that's not too dissimilar from Perry's work with Adrian Sherwood or Mad Professor. The moody and mysterious title track has an insistent and driving riddim with Perry urging the listener to follow a vegetarian way of life: "No meat, no beef/No chicken heads, no chicken backs, no chicken leg/No meat, no cannibalizing..." "No Age" features a repeated progression of dubby synth chords with various percussive and sound effects (its dub is similar, but incorporates more Perry exhortations). "Magik" is more of a trippy electronica cut than reggae, but concerns a recurring theme in Perry's work ("Macumba Rock" from his recently released Rainford album is about voodoo and black magic). Each of these tracks comes in just shy of 10 minutes--and all are too long, frankly. The material is great, but everything's needlessly stretched out. A more condensed and focused record would have yielded more powerful results. 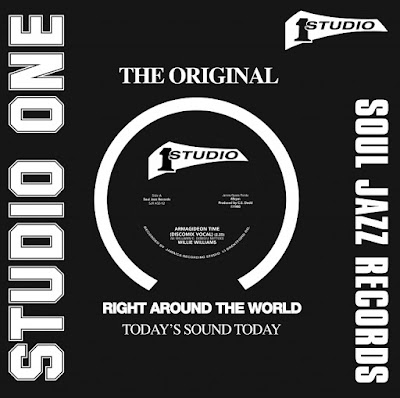 As part of their ongoing Studio One reissue series, Soul Jazz Records is releasing classic tracks from Clement "Coxsone" Dodd's pioneering label as a series of 12" singles. So far, I've picked up Horace Andy's 1973 hit sizzler "Fever" b/w Cedric Im Brooks' "The Flu" (an instrumental version of "Fever")--and have Alton Ellis' 1967 rocksteady smash "I'm Still in Love" (Althea and Donna used this riddim for "Uptown Top Ranking") b/w Soul Vendors' funky "Just a Bit of Soul" (love the Jackie Mittoo keyboard work here!) coming soon in the mail. Of all the 12" singles issued so far, the one that I'm most excited to have in my hands is Willie Williams' "Armagideon Time (Discomix Vocal)" b/w "Armagideon Time (Discomix Version)" (12" vinyl single, Soul Jazz Records, 2019), an absolute favorite of mine that I think is one of the greatest reggae songs ever recorded. These versions (first released in 1980) are not too far removed from Williams' original 1979 Studio One single (which utilizes Dodd's magnificent "Real Rock" riddim and is credited to Dodd/Mittoo/Williams), but incorporate laser sounds, almost ethereal piano chords/lines played by Mittoo on a Fender Rhodes, and additional percussion. I have these exact tracks on a treasured blue and white paper label Studio One reissued 7" single (pressed in the US in the 1990s?) that I found a few years ago, but they're titled "Armagideon Time" b/w "Armagideon Version" (with Sound Dimension). Of course, this song gained a vastly wider audience beyond JA when The Clash covered it brilliantly for the b side of their 1979 "London Calling" single (I was first introduced to "Armagideon Time" via The Clash's Black Market Clash compilation). Indeed, Joe Strummer's impassioned vocals--full of empathy, outrage, and desperation--contrast so well against the band's taut, muscular, but spare take on the music (they really "got" reggae--and Topper Headon's drumming on this cut is phenomenal). Thematically, "Armagideon Time" was also the perfect companion piece to "London Calling's" apocalyptic/post-nuclear "error" societal breakdown scenario. But for all of Strummer's emoting, Willie Williams' simple, straight-forward, and relaxed vocals are all the more powerful for their same-as-it-ever-was matter-of-factness. His lyrics pack all of the punches themselves...

A lotta people won't get no justice tonight
So, a lot of people going to have to stand up and fight
But remember, to praise Jehovah
And he will guide you
In this Iration, it's Armagideon"

Willie Williams' "Armagideon Time" is one of my favorites, too. I'll have to track down this new pressing