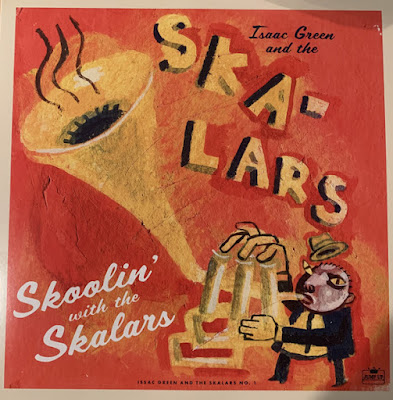 Isaac Green and The Skalars: Skoolin' with The Skalars (Clear vinyl LP/cassette, Jump Up Records, 2019; first issued on CD by Moon Ska Records in 1996): Back in the early '90s--when I was running the Moon promotions office from a desk in my kitchen at night/on weekends and the seeds of the mid-'90s ska boom were just taking root--I used to field these phone calls from this kid in St. Louis, who would chat me up about all things ska. But more importantly, he'd pump me for info about the working mechanics of the underground music scene--like how doing you go about booking a show, promoting a band, releasing a record, etc. A few years later, a single shows up, I'm hearing about Isaac Green and The Skalars from other Moon acts on tour playing St. Louis (including, of course, Moon head honcho Bucket of The Toasters)--and maybe half a year later, I'm hiring a graphic designer to come up with the cover for their debut album on Moon and sending their master tape to our pressing plant. It's not every day that someone actually uses the (limited) knowledge you share with them, but Isaac Green took it ran with it, practically willing this band into existence (note that his role in the band onstage was MC/moves and as band manager offstage)! Isaac Green and The Skalars' best known track is "High School," thanks to their excellent music video (directed by Drew Sentivan of The Fiascos in collaboration with Crazy Duck Productions for Moon) that was shown nationally on MTV's alternative music video channel M2. I was a bit shocked when I listened to the album recently and realized that it wasn't Jessica Butler's voice I was hearing (I had forgotten that it was sung by Amy Scherer, but she left the band after the album was released, so Jessica recorded a new vocal track for the music video). There are a host of other really great songs on The Skalars' debut, including another fantastic moody reggay-ish cut, "Don't Count" ("...on getting what you want/But appreciate it, when it comes"), which is almost a companion piece to the unsettling uncertainty conveyed in "High School"; the rhythm-and-blues goes ska versions of the Marvelettes' "Beechwood 4-5789" and Wynonie Harris' "Bloodshot Eyes," as well as a gorgeous cover of The Heptones' "I Love You" (there were three female vocalists/brass players in the band!); and some more really fine originals, particularly The Skatalites'-like "Special K," and the swinging "Phat Steaks." This first-time-on-vinyl edition of Skoolin' with The Skalars was released to coincide with a rarely offered reunion show The Skalars played in Chicago in November that didn't disappoint (they were terrific live in the 1990s, too!). Depending on your age, this LP is a great excuse to be introduced to the band or reminded why you loved them so much way back then (it's hard to believe that 23 years have passed since Skoolin' was released and it's now a Third Wave classic!). If you can find it, The Skalars' sophomore album for Moon Change Up is pretty killer, but came out in '99 when the bottom fell out of the ska scene in the U.S. and few bought/heard it... 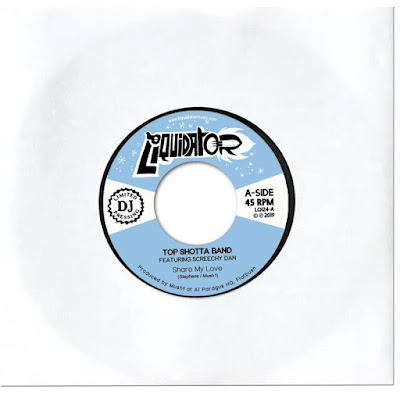 Top Shotta Band featuring Screechy Dan "Share My Love" b/w "Cool and Deadly" (7" vinyl single, Liquidator Music, 2019): Brooklyn's Top Shotta Band--helmed by trumpeter/producer djMush1, who was previously in The Slackers and Murphy's Law, and fronted by dancehall veteran Screechy Dan, known for his work with Vital Crew/Big Yard/Shaggy Posse, under his alias Leon Dinero, and with Megative on their amazing debut album--have a terrific new single out in advance of their forthcoming Spread Love LP, to be released in 2020. Both cuts have a tremendously good vintage Skatalites/Don Drummond ska vibe and sound to them, with Screechy Dan making his pitch for why he should be her man in "Share My Love" and boasting of his prowess and resilience in "Cool and Deadly" ("I'm a champion/I'm nobody you can stomp on/But you can keep your eyes on/A conqueror, that's what I am!"). Keep and eye out for their album and go their shows if you have a chance, as they're stellar live. 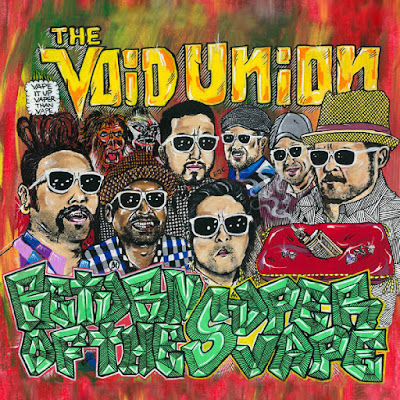 The Void Union Return of the Super Vape (CD/digital/Red vinyl LP, Jump Up Records, 2019): The last time we heard from the Boston-area super-group/musical collective that is The Void Union was back in 2011, with their superb, second album Higher Guns (read our review of it here). While they may not be the most prolific act out there, The Void Union make up for it with consistently top notch music, through and through, as heard on their new (and the Lee Perry punning) Return of the Super Vape. As always, The Void Union plays a mix of vintage jazzy/big band JA ska, rocksteady, and modern ska--and there's a wonderful variety of sounds, since just about everyone in the band is a gifted songwriter and contributes at least one track to the recording (just another reminder of how there is strength in diversity). Many of the cuts here are concerned with women--setting up a rendezvous with one (the sing-along "Kassablanca" with Mr. T-Bone on guest vocals), loving them ("Mi Corazon" and "Mine"), being confounded by their ways ("Allora"), and being so head over heels that you can't imagine life without her (the ethereal "Build a World" with Jr. Thomas on lead vocals, Dave Hillyard on sax, and backing vocals with Hepcat's Alex Desert, Western Standard Time's Chiquis Lozoya, and The Expanders' John Butcher). As well, there are some amazing instrumentals, including the sprightly, keyboard-focused (of course) tribute to The Upsetter "Dread Perry" and the really lovely "Wash Yo' Hands," which gives the chance for the horn players to show off their chops. But, perhaps the best track is the razor-sharp commentary on our post-truth America (thanks to the willful ignorance, gaslighting, and propagandizing of the MAGA hatters, the entire GOP, and the nation's "president"--the long-term consequences to our democracy be damned), the "Shame and Scandal"-like "The News Cycle" (with The Pietasters' Steve Jackson at the mic): "I posted on my page today/I knew it wasn't true, but I like it anyway/I argue with another, about a baby didn't know I had/He said, you made a mockery of mom and dad/We won the news cycle/We won the news/Fuck everybody else/Fuck everybody else...I didn't verify your Lincoln quote/I didn't exercise my right to vote/I can't acknowledge my most fancy fears/Because I'm drowning in them Liberal tears..." (though one doubts that there will be the change of heart that takes place just before the end of the song: "I smacked my television set last night/Strapped my life up to some dynamite/Now that I've got clarity, I don't consent/No need to make America great again").