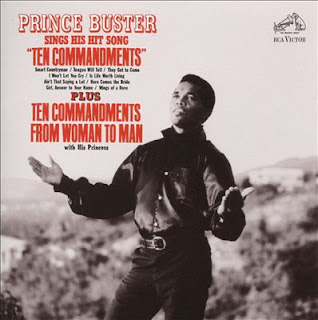 It's not every day that a major label (what's left of 'em) reissues a classic ska record and gets it so right. Sony Music (in partnership with Reel Music, a label devoted to reissuing soul and reggae albums) has remastered (from the original analog tapes) Prince Buster's 1967 compilation Prince Buster Sings His Hit Song "Ten Commandments," which was first released by RCA Victor in the US. This album probably came about because earlier that year, Buster had appeared at the New York World's Fair representing Jamaica, along with Jimmy Cliff, Monty Morris, Millie Small and others, and then followed it up with a successful tour of the United
States.

This is the first time this album has appeared on CD and they've done such a good job with the remastering that when you're listening to "Is Life Worth Living" you'll find the sound so crisp and natural that it seems like you're in Federal Studios with The Prince. Also, the CD booklet contains an extensive essay on Prince Buster by reggae/Bob Marley archivist Roger Steffens (nothing earth-shattering is revealed, but it is good nonetheless). Just so you know, The Duff Guide to Ska is no shill for the man-- I bought my copy of Prince Buster Sings His Hit Song "Ten Commandments" through Ernie B's Reggae (which, by the way, is an amazing source for ska and reggae LPs and CDs).

About ten years ago, during the tail-end of the third wave skaboom, the majority of Prince Buster's back catalogue was out-of-print. As a result, I spent far too many blurry-eyed days scouring the internet, trying to track down the Holy Grail of Prince Buster comps: The Prophet (on Lagoon Records in France, which was forced to withdraw it from distribution, as there was some dispute over who had the authority to license the tracks to the label) and the Gaz Mayall-selected King of Ska (on Quattro Records in Japan--this was several years before it was released on Prince Buster Records and then Jet Star). So it just seems plain ironic to me all these years later, now that the US ska scene is once again firmly rooted underground and generally unrecognized and unheralded, that practically all of his original albums (even the formerly hard-to-find The Message Dubwise) have been re-issued on LP and/or CD and are readily available.

A few years ago, I was lucky enough to pick up Hush Up, a terrific Prince Buster comp put out on Islam Records (one of Prince Buster's many imprints) from Interpunk of all places. I assume that Buster put this out himself (the label's address is in Miami, Florida, where Buster lives), but I've never come across it anywhere else again. It's a shame, as it's a good mix of tracks found on Fabulous Greatest Hits and King of Ska, as well as some of his later work with Gaz Mayall and The Trojans. Snap this one up if you ever come across a copy.

Here's a plea from a fan: someone (Blood & Fire or Pressure Sounds listening?) should put together a box set of Prince Buster's recordings and productions, featuring rare releases, extensive liner notes, lovingly remastered sound, film clips from the New York World's Fair and Ready Steady Go!, the works--the audience for this is out there (there may not be tons of ska fans, but the world holds more reggae fans that we expect it does...).

And we need to enjoy ourselves, it's later than we think...
Posted by Steve from Moon at 12:12 AM

And if the people at RCA are listening, consider reissuing Lord Tanamo's outrageously rare lp "Come Come Come To Jamaica."

Unfortunately it seems the biggest block to Prince Buster's material being reissued is Prince Buster himself. Many labels have tried to license his productions, but apparently he charges an amount of money which the labels feel they wouldn't be able to recoup in sales. It's really a shame as apparently aside from his (mostly) sub-standard vocal outings, his productions of other artists is top rate stuff. No one gets to hear it though.
There is a label in Japan that he works with, they've put out a couple CDs and a bunch of 45s, but getting those outside of Japan is very expensive. Maybe one of these days he'll wake up and realize that he missed the boat on the Reggae/Ska reissue scene, which seems to have peaked about 5 years ago, and get a deal put together before the whole market dries up completely.

Thanks for your comment. I second your request to release more Tanamo upon the world.

Thanks for your comments. I've had similar suspicions about this, too--and it explains why I've never seen him play a show in NYC. (A real shame...he would have sold a whole mess of tickets had he put on a gig here in say 1997...) You gotta have deep pockets to hire/license The Prince.

I have the excellent Rock A Shacka Prince Buster compilations ("Dance Cleopatra" and "Voice of the People"), which collect many of his harder to find singles, plus the live Prince Buster recording with The Determinations, "Prince of Peace." I was lucky enough to find that Ernie B's Reggae had these CDs in stock a few years ago for a very reasonable price. Rock A Shacka also reissued a whole bunch of his vinyl singles (which carefully reproduced the paper labels from many of his imprints), but I never found them in the US (and they were really too expensive to mail order).

Prince Buster--give your fans in the USA what they want: some gigs and a top-notch box set!

Yes this problem has been discussed for many years by many Jamaican music fans. Mr. Campbell thinks a bit too highly of himself and of the commercial value of his recordings. (I met him once in Jamaica, in his shop.) Aside from his own songs, there are indeed scores of great sides by other artists that he produced throughout the 60s, covering ska right to early reggae. There is enough high-quality material to fill dozens of CDs, at one time I had many of the original singles so I am familiar with what would be possible. It's really unfortunate that most people won't get to hear this music, I don't think he values this stuff highly at all as art, just for it's money-making potential.