Ska Films at Lincoln Center: "Legends of Ska" and "The Liberty of Norton Folgate"! 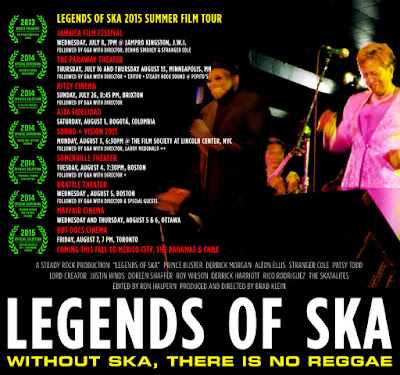 This coming Monday night (8/3/15), there are two, very unusual opportunities to see ska-related films on the big screen at Lincoln Center. As part of their Sound + Vision 2015 movie series, the Lincoln Center Film Society is screening "Legends of Ska: Cool and Copacetic" by Brad Klein (with a Q and A session afterwards with the director and percussionist Larry McDonald) and Julien Temple's "The Liberty of Norton Folgate."

Here's the LCFS copy about the "Legends of Ska" documentary:


"Whereas second- or third-wave ska bands like The Specials or No Doubt maintain a degree of visibility through North American radio play, the Jamaican originators of the genre often get short shrift. Brad Klein sought to correct this imbalance. On July 12-13, 2002, Klein mounted two massive concerts in Toronto with early-’60s ska superstars like Prince Buster, Derrick Morgan, Stranger Cole, Alton Ellis, Millicent “Patsy” Todd, and the Skatalites. The concert was documented, and, over a decade, shaped into a concert film interspersed with funny and poignant interviews with band members. Also includes a hilarious cameo from Keith Richards!"

And here's "The Liberty of Norton Folgate" blurb:


"A concert film shot during a performance at London’s Hackney Empire, Temple’s inventive approach to Madness’ concept album of the same name connects the iconic ska band with their working-class British roots and a populist tradition of entertainment. The film weaves comical introductions to songs and a tour of various historically seedy London neighborhoods led by Madness’ Suggs and Carl into footage from the concert, whose audience is peppered with burlesque “types” who sometimes steal the show."

I can't make the "Legends of Ska" screening, but my son and I already have tickets to "The Liberty of Norton Folgate!" Read what I wrote a few years ago about Madness' phenomenally good and profound album at Reggae Steady Ska.


"While it seemed like their 2 Tone peers had run out of things to say, [on The Liberty of Norton Folgate] Madness were delivering the songs of great meaning that I had wanted from them in my youth—a concept album that promotes/embraces multiculturalism as the only path to real freedom, and the notion that the history of a place and its people has an extraordinary impact on making this possible."