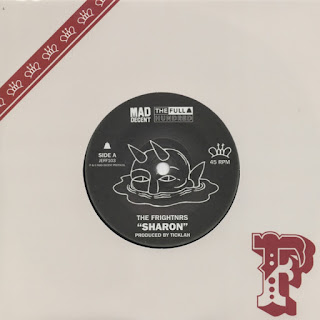 What good times these are to be a Frightnrs' fan! First there was the June release of their sublime rocksteady cover of Etta James' "I'd Rather Go Blind" 7" single on Daptone label--and now the lucky amongst us have the new "Sharon" b/w "Admiration" single in our sweaty mitts. Even though The Frightnrs previously have released two really excellent digital EPs (The Frightnrs and 12/21/12), this single marks the first time original Frightnrs material has been released in a physical (and tangible via sweaty mitts) format. And what incredible original material it is!

The loping, hypnotic, rootsy reggae cut "Sharon" is a confused, angry, and intense plea to the woman of the title not to leave the singer:

"Oh, why you leave me, Sharon?
Why you riff and run off
and you leave me for some mystical man?
He won't love you like I can
Ain't nobody in this whole wide world
Who really all understands

How many times must I prove to you
That there is nothing I wouldn't do
After all that we have been through
Maybe, girl I thought that you knew..."

As always, The Frightnrs make the humiliating sting of abandonment and desperate fear of loneliness sound so good--the next time your girlfriend or boyfriend dumps you for no apparent (or good) reason, you're gonna want to pull this one out and play it over and over! Let the music absorb your pain (it's okay to wallow in self-pity for a little bit!).

The unfairly-accused narrator ("They're gonna punish me for something that I didn't do!")--more fool for a pretty face than anti-hero--of the spaghetti Western cut "Admiration" is determined to evade his pursuers, since capture will certainly subject him to vigilante justice: "I didn't know her before today/Now, I'll walk across the sand/and I'll sail across the sea/They've got their nooses ready/hanging underneath a tree/With their horses and their guns/they've got this man on the run/But what I have done remains a mystery to me." The precise and relentless beat of this track conveys the pressured urgency of continually pushing forward to stay free and, more importantly, alive--while a ringing, almost shimmering solo guitar line conveys his loneliness as he plods across a bleak, sun-baked landscape that stretches to the horizon and offers no sanctuary.

It's my impression that this single is a bit hard to come by (I bought one the day it became available on Ernie B's Reggae--but when I checked later that same day, it was no longer in stock; the only other site I know that is carrying it is in Europe--BuyReggae.com), but it is very much worth tracking down!