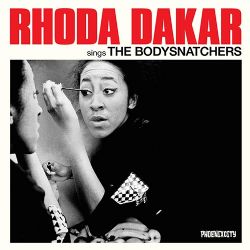 As you probably already know, I'm crazy about this album (which features Ms. Dakar singing both previously recorded and unrecorded Bodysnatchers tunes and she's backed by two Specials, Lynval Golding on guitar and Horace Panter on bass; Sean Flowerdew of Pama Intl/Phoenix City All-stars on keys and co-producing; Mark Claydon of The Get Up on drums; Lenny Bignell of the Sidewalk Doctors and Phoenix City All-stars on guitar and co-producing; and Karl Wirrmann from Intensified on sax)--read my Duff Guide to Ska review of "Rhoda Sings The Bodysnatchers" album here. I strongly urge you buy it if you don't already have it!
Posted by Steve from Moon at 4:15 PM