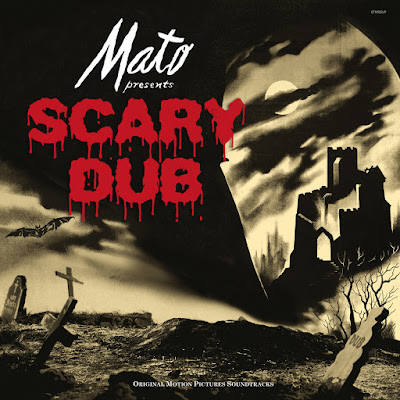 At first glance, it might seem like a kind of a tired and gimmicky concept--a dub cover album of horror and sci-fi movie and TV theme songs--but Mato (French producer Thomas Blanchot--I reviewed his awesome 2020 single "Also sprach Zarathustra" b/w "Maiden Voyage" here) pulls it off brilliantly with his Scary Dub collection (LP/digital, Stix Records/Favorite Recordings, 2021; available through Juno Records in the UK). These are imaginative, evocative, and fun re-workings of embedded-in-our-brains theme songs (plus three fantastic originals!) that convey the dread, mystery, and menace of their corresponding films/shows quite effectively. Mato's impeccable work here may remind the listener of Henry "Junjo" Lawes' crisp, warm, and minimalist productions--it turns out he's one of Mato's fave producers--and surely the Lawes horror-themed dub album he created with Scientist back in 1981 was an inspiration for Scary Dub.

The album starts with "The Exorcist," whose unrelenting keyboard line creates an almost unbearable tension with the track's reggae underpinnings (a similar result is achieved with an excellent version of John Carpenter's "Halloween," which also has that maddening repeated keyboard line)--and Mato has added a short vocal part: "Sweet exorcist here guard little girl in danger..." (in addition to the cellos working overtime, there's also a vocal line in "Jaws Dub": Young shark, your teeth are gonna break next time you bite!"). "Dracula's Dub," a terrific Upsetters-sounding Mato original (Frankenstein, Dracula, and The Mummy films have have no universally recognized theme songs, but are essential to the genre, so Mato wrote his own), opens with J.S. Bach's "Toccata and Fugue in D minor" (which long has been associated with horror films from its use in 1931's Dr. Jekyll and Mr. Hyde and 1962's The Phantom of the Opera) and has a great early '70s Hammer horror vibe to it (the scream sound sample seems like the same one that was used for WLIR's "Screamer of the Week" back in the 1980s!). There also are killer versions of the Nightmare on Elm Street, The Twilight Zone, and X-Files themes.

I absolutely love "Return of the Living Dead Dub" (it's my favorite gut-churning, freak-out zombie film--the re-animated cadaver on a hook in the medical supply walk-in fridge, "Send more cops!," Tarman!) that lends the cheesy but effective original cut some dramatic majesty with the use of great synth horn lines and makes you feel the movie's terrifying inevitability that we're all gonna be zombified, have our brains eaten (the only thing that stops the pain of being dead!), or end up sliding ourselves into the crematory oven. Another awesome Mato original, "Frankenstein's Dub" employs mad scientist sound effects, such as bubbling test tubes, zaps of electricity, a grunting monster ("I'm alive!"), and theremin-ish keyboard melody. Plus it borrows some knowing dialogue between the blind hermit and the Monster from the 1935 film Bride of Frankenstein:

Perhaps the greatest track on the album is "The Thing Dub" (I never realized this was written by Ennio Morricone), which sports incredible synth washes and sounds like it could have come off Mad Professor vs. Massive Attack's apocalyptic No Protection. Scary Dub is an album you'll want to listen to any day of any week, not just around Halloween. (Do yourself a favor and make sure to watch the mindblowingly good animated videos for "Dracula's Dub,"  "Return of the Living Dub," and "Halloween Dub"!) 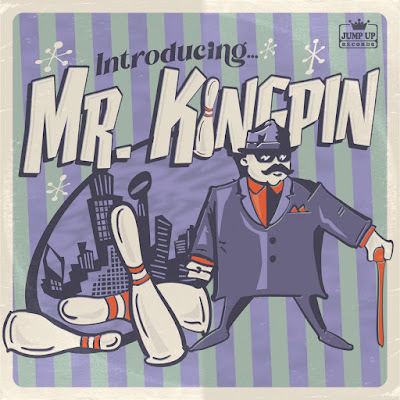 Released as a teaser for his forthcoming album Introducing...Mr. Kingpin on Jump Up Records, Mr. Kingpin's incredible new skinhead reggae single "Think Again" (Digital, self-released, 2021) opens with the cool and deadly warning, "What were you drinking/If you were thinking/That you could roll the dice and fool me twice/It won't work anymore...So now it's my turn/To watch your world burn...You thought that this was over/You'd better think again!" He makes it crystal clear that the payback/blowback for messing around will be dire. Guest musician Roger Rivas' Hammond organ playing on this track is nothing short of stellar and makes the cut sound like it could have come off King Hammond's classic Revolution '70 (Nick Welsh's stellar tribute to the keyboard greats Harry J, Jackie Mittoo, Winston Wright, Glen Adams, Ansel Collins, et al). If the rest of the album is anything like this track, Introducing...Mr. Kingpin is going to be on a lot of top 10 albums of 2021 (make sure to check out the video for the song).