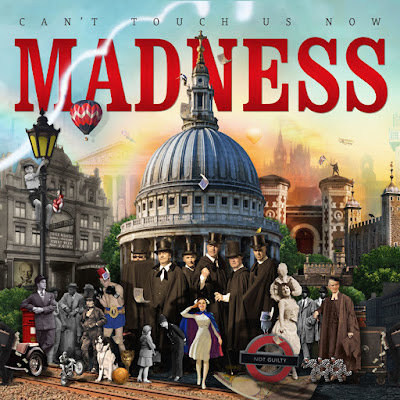 Madness Can't Touch Us Now (16 track CD/12 track LP, Lucky Seven Records/UMC, 2016): You've got to hand it to Madness--there are precious few bands this far into their (incredibly successful) career who continue to give enough of a damn to resist the temptation of churning out by-the-numbers albums and sitting back to watch the royalty checks come flooding back in the mail. Madness' eleventh album Can't Touch Us Now keeps with the fantastic creativity and high quality control of their two most recent records, The Liberty of Norton Folgate (2009) and Oui, Oui, Si, Si, Ja, Ja, Da, Da (2013), and is packed with the kind of wonderfully crafted upbeat ska, melancholy pop, and uniquely British music hall tracks one always hopes for from the band. All Nutty Boys are present--with the exception of the much missed Cathal Smyth--and, always, all members had a hand in writing this collection of songs (which may explain their ongoing wellspring of great music--they don't rely on one or two songwriters to carry the day).

Ska music purists will find great satisfaction in "Mumbo Jumbo" (a broadside aimed at right wing politicians: "Cobbled together raise your right arm/Stoke a little fear back on Maggie's farm"--which includes a great tip of the hat to Prince Buster's "Madness" at the end, when Lee Thompson sings "propaganda minsters" repeatedly) and the melodramatic spaghetti Western reggay of "Grandslam." As well, there are several really excellent ska-influenced music hall cuts (a Madness specialty)--"Mr. Apples" (which concerns a puritan who sneaks out at night to indulge the very vices he publicly decries), "I Believe" (about a boy who finds the strength to reject formal religion and its bigotries in favor of a moral framework that embraces difference and diversity), "Can't Touch Us Now" (about star-crossed lovers feeling invincible despite their fate), and "Herbert" (literally about trying to avoid a shotgun wedding, but also a musical nod to their friend, the late Ian Dury). For those fans whose tastes extend a little further afield, Can't Touch Us Now features some extraordinary pop songs, including the amazing Beatle-ish "Another Version of Me" (criminally, not included on the LP!), the neo-soul of "You Are My Everything," the lush ballad "Pam the Hawk" (about an actual skilled Soho beggar), and a trio of Motown-via-Madness cuts: "Don't Leave the Past Behind You," "Good Times," and the heartfelt, spoken/sung Amy Winehouse tribute--based on a real-life chance encounter Suggs had with her just days before she died--"Blackbird" ("'Alright, Nutty Boy,' she said/Passing me on Dean Street/She's striding through the puddles/On black stiletto feet/Guitar over one shoulder/Swirling swagger in her stride/And a well appointed pencil skirt/Just maybe 18 inches wide").

While listening to the album, you should try to pick out some of the song references on the Sgt. Pepper's-like album cover (ironically, Madness' album cover for Oui Oui... was designed by Sir Peter Blake, who is best known for creating the cover of The Beatles' Sgt. Pepper's)--the title cut mentions the Tower of London, "I Believe" name-checks St. Paul's Cathedral, etc. (too bad that the LP/CD insert doesn't include a map of all of the people and places and why they were selected; what's the significance of the Bedford Theatre in Camden Town or the inclusion of the rude boy Islington Twins from Janette Beckman's photos?).

Can't Touch Us Now is another triumph from Madness--one that you shouldn't miss!

CTUN is everything I'd been hoping it would be, and I rate it up there amongst their best. If there's any justice in this world, it'll sell in enough numbers stateside to warrant -- at very least -- a short run of gigs here in NYC.

Cow, Madness are long overdue to play NYC and would do very well here, I expect. Sadly, I don't think there's been much of a promo push for this album here in the USA. But if sales are good, it would capture someone's attention and help make the case for dates beyond the LA area. Fingers and toes crossed.

Then again, I never thought I'd have an opportunity to see Derrick Morgan, but there he was, gigging in Brooklyn to an enthusiastically appreciative room. I think I've arrived at the point where I'd give serious thought to cobbling together a UK trip around seeing Madness in London.