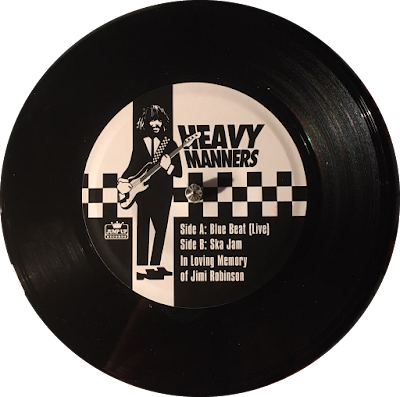 Released to coincide with a Thanksgiving weekend tribute show (date and venue etched in the runout groove of side A) in honor of Heavy Manners' co-founder and bassist Jimi Robinson, who unexpectedly passed away this past July, this single features two live cuts from this Chicago-based band's heyday in the early 1980s! Information about these tracks' provenance is lacking, but it seems likely that they're the same cuts featured on the long-out-of-print 1996 compilation CD of Heavy Manners' output, Heavier Than Now.

The Robinson-penned "Blue Beat" takes a propulsive 1950's rhythm and blues/early rock 'n' roll sax riff and marries it to a brisk ska beat (much like what the 1960s JA originators did); this terrific version was recorded for a 93XRT "Sunday Night In Concert" performance and proves that the band were formidable and fun in front of an audience (Robinson sings: "The blue beat, ska beat riddim won't let me go!"). "Ska Jam" (titled "Rude Boy Jam" on their career retrospective comp) was written by singer Kate Fagan and recorded live in the recording studio. It's a ridiculously catchy New Wave ska song (a style of ska I like to refer to as Square Peg ska) urging ska fans of every stripe to join the Heavy Manners party ("Every rocker grab a rock/And get up, join the ska jam/Every ska fan, make this a ska land/Get up, join the ska jam/And the girls say/We are the rude girls/We all love the ska jam/And the boys say/We are the rude boys/We all love the ska jam!"). It's a blast to hear this pioneering ska band in action (who were directly inspired by 2 Tone--Robinson had visited London in 1980 at the height of the ska craze and worked on starting Heavy Manners upon his return) and a wonderful and fitting remembrance of such a key player/musician in the history of American ska.

All sales of this single will benefit Robinson's family.

For more on Heavy Manners, read The Duff Guide to Ska review of their 2010 12" single featuring "Get Me Outta Debt"/"Fight the Good Fight."