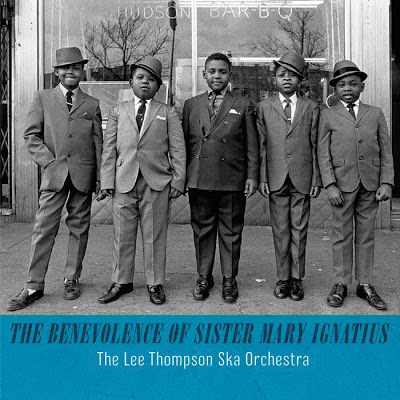 If you're a middle-aged ska fan like myself, you'll fondly remember Madness sax man Lee Thompson's early 90s ska-pop side project, Crunch!, launched with Madness guitarist Chris Foreman (check out some of their old videos here and there). Two decades later (with an amazingly resurgent Madness still releasing stellar albums like The Liberty of Norton Folgate and Oui Oui, Si Si, Ja Ja, Da, Da--click through the links to read my reviews of them), Thompson has embarked on another side trip--The Lee Thompson Ska Orchestra--with some of his old Crunch! bandmates (though Madness bassist Mark Bedford is along for the ride instead of Foreman) and several Madness collaborators (like Terry Edwards).

What is most surprising--even jarring--is that this time out, the fantastic sounds Thompson and company lay down couldn't be more different. Instead of the heavily produced, synthesized ska-pop of Crunch!, the warmly organic The Benevolence of Sister Mary Ignatius is vintage Jamaican ska to its core, as it should be (with support from Prince Fatty's 70s-era production). The title of the album refers to the Roman Catholic nun who was head of the Alpha School for Boys in Jamaica; during that period, its music program fostered some of the most celebrated Jamaican musicians known to humankind, including Tommy McCook, Johnny "Dizzy" Moore, Lester Sterling, Don Drummond, Dizzy Reece, Cedric Brooks, Theophilus Beckford, Rico Rodriguez, Desmond Dekker, Yellowman, Vin Gordon, Joe Harriott, Headley Bennett, Leroy "Horsemouth" Wallace, and Leroy Smart. Since this group includes four of the founding members of The Skatalites (and many of their musical friends), it only follows that this record is essentially a tribute to the sound and vision of that extraordinary band and its heyday.

The Benevolence of Sister Mary Ignatius contains a mix of smartly arranged instrumental covers (Baba Brooks' "Guns Fever"; The Skatalites' "Eastern Standard Time"; Byron Lee and the Dragonaires' cover of "Soul Serenade"--I particularly liked the Dave Brubeck-like take on Lalo Schifrin's "Mission Impossible" and the Madness-y cover of Lynn Taitt's essential "Napoleon Solo") and sweet vocal tunes (Stranger Cole's and Lester Sterling's "Bangarang"; Desmond Dekker's "Fu Manchu" with a fantastic Bitty McLean singing; James Brown's and Fred Wesley's "Hot Pants"; Fat's Domino's "Hello Josephine"; The Blues Busters' "Soon You'll Be Gone"; I'm always a sucker for one of the greatest reggay tracks of all time, John Holt's "Ali Baba"--Winston Francis and Alcapone have recently covered this tune with Prince Fatty, too; and while Paul Davidson's reggae version of The Allman Brothers Band's "Midnight Rider" was a huge hit in the UK in 1976, I've been turned onto this tune since Bad Manners' 1992 reading of it on Fat Sound). Needless to say, all of the performances here are top-notch and throughly enjoyable.

Many of these songs--particularly the early reggae cuts released during '67-'71--were the ones that Thompson grew up on (and influenced the whole 2 Tone generation) and Thompson's and the Orchestra's affection and respect for them and their originators rings through loud and clear. My only minor quibble with this album is that it's too reverential to its source material (a more daring approach to the arrangements might have yielded more thrills), but I suspect that the majority of traditional ska fans will be mighty pleased with The Benevolence of Sister Mary Ignatius as is--and the talent on display here sure gives them every right to be.