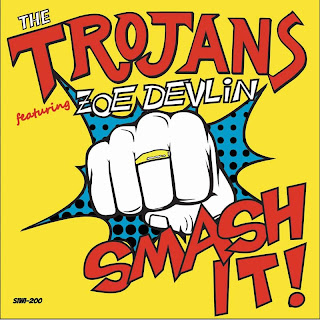 It's been almost 15 years since The Trojans released their last album containing their trademark blend of Japanese, Russian, and Gaelic music with Jamaican ska, rocksteady, and reggae (though they've been playing live throughout this absence from the recording studio, most notably at the Notting Hill Carnival), so it's big news that their new album Smash It is now available as an import from Ska in World Records (Japan) and as a more reasonably priced digital download from CD Baby (word is that there will also be a vinyl single or two from Ska in the World and that the album will be issued from Gaz's Rockin' Records in the UK at some point in the near future).

If you're unfamiliar with the The Trojans, you should check out this post I wrote about Gaz's book (which gives a good overview of his work with The Trojans, his label, and Gaz's Rockin' Blues)--and be sure to track down Trojan Warriors: For Your Protection, The Best of The Trojans, a great Trojans compilation that Moon Ska Records released back in 1996.

Being the old skool fan of The Trojans that I am, I'm going to try to get my mitts on a copy of the import Smash It CD without breaking my bank!
Posted by Steve from Moon at 3:46 PM

I haven't even thought about them since the late 90s, but I love these guys. Just realized that I no longer have their CDs. :( Prince Duff, any recommendations on the best way to find their catalog?

i-tunes carries quite a bit of their stuff, and it beats import prices

And you can find some of their stuff through CD Baby, Discogs (I've tracked down and bought some great music through this site), and eBay (the easiest release to find is their Moon comp, "Trojan Warriors").