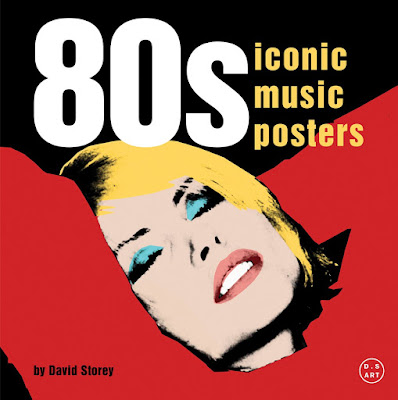 As any 2 Tone fan who's an obsessive reader of album credits knows, artist and graphic designer David Storey had a key role (along with Jerry Dammers and John "Teflon" Sims) in creating much of that label's classic cover artwork, including The Selecter's debut album, The Specials' Ghost Town EP, The Special AKA's In the Studio LP and "Nelson Mandela" single, and Rico's Jama Rico. After graduating from Hornsey School of Art in the late '70s, Storey joined Chrysalis Records as an art director just in time to have a significant hand in designing the stunning, enduring, and highly influential visuals that accompanied--and helped define--the extraordinary music released on the 2 Tone label.

Recently, Storey recreated many of the promotional posters he originally designed for the 2 Tone releases and other Chrysalis artists (Fun Boy Three's "Our Lips Are Sealed" single, Blondie's "Atomic" and "Rapture" 45s, and records from The Housemartins, Iggy Pop, The Lightning Seeds, Icehouse, and others) as a series of incredibly gorgeous limited edition fine art prints (I have my eye on the "Nelson Mandela" and Rico Jama prints--and the the "Starvation" charity single poster is positively haunting in what it represents). He's also collected all of these prints in a smart and affordable booklet titled "80s Iconic Music Posters," which features an appendix with Storey's recollections about each poster (what inspired it, who was involved in its creation; his stories regarding the "Nelson Mandela" and Rico Jama designs are fantastic!), as well as a reprinted, in-depth, must-read article from the March 20, 1980 issue of Sounds regarding how the cover art for The Selecter's debut album came to be.

Many of the original posters are long gone (I do happen to have a copy of the This Are 2 Tone poster that was included in the first pressings of the UK version of the album!), lost to time; from being taped on and torn off bedroom and dorm walls too many times; or from the general abuse of one's things that comes along with just being young (I still wish I had my Keith Haring "Free South Africa" and Echo and the Bunnymen Heaven Up Here posters from the '80s). But this book and these prints give one a second chance at having a piece of these iconic images and they're a perfect gift for any 2 Tone fan you know.