Record Store Day 2019 (US) Update: The Skatalites' "Greetings From Skamania" on LP for the First Time! 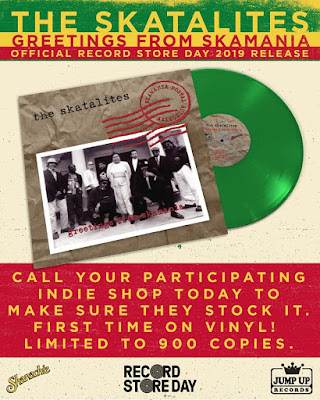 When the list of 2019 Record Store Day releases came out late last week, I was surprised not to see anything from Jump Up Records on the list, particularly in light of their incredible reissue (with Shanachie) of The Skatalites' Hi Bop Ska for RSD 2018.

So, I reached out to Jump Up's Chuck Wren to see what was going on and he let me know that due to some sort of clerical error between his distributor and the RSD folks, Jump Up/Shanachie's reissue of The Skatalites' 1996 album Greetings From Skamania was not included on this year's RSD list--but it should be in record stores on Record Store Day this April 13, 2019.

Here's the promo copy of the record from Jump Up:

As you can see from the promotional image, there is some concern that stores may not be aware that this LP is available, so get in touch with your local shop to make sure they'll be stocking it!