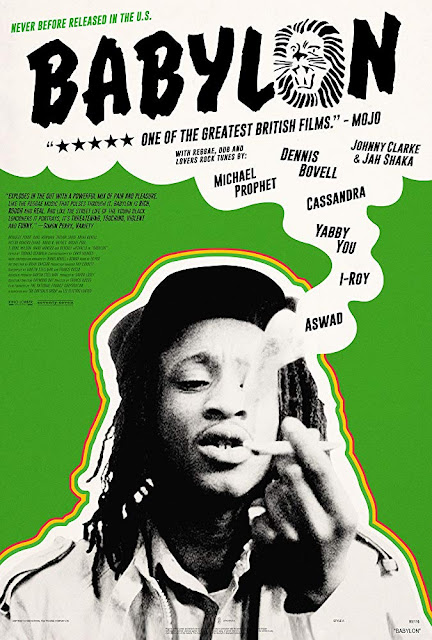 Released in 1980 and celebrated as a British entry into the specialized genre of reggae music/culture films (joining, of course, Jamaican movies "The Harder They Come" from 1972 and "Rockers" from 1978) but never shown before in the US (see below for why), "Babylon" finally has its American premiere at the Brooklyn Academy of Music, from March 7 through 14, 2019.

BAM's promotional copy about "Babylon" provides all the reasons why you need to see this film:

"Banned from the New York Film Festival for “being too controversial, and likely to incite racial tension” (Vivien Goldman, Time Out) and never released in the US, Franco Rosso’s incendiary 1980 film follows a young dancehall DJ (Brinsley Forde, frontman of landmark British reggae group Aswad) in Thatcher-era South London as he pursues his musical ambitions while battling fiercely against the racism and xenophobia of employers, neighbors, police, and the National Front. Written by Martin Stellman (Quadrophenia) with beautiful, smoky cinematography by two-time Oscar winner Chris Menges (The Killing Fields), Babylon is fearless and unsentimental, tempered by the hazy bliss of the dancehall and set to a blistering reggae, dub, and lovers rock soundtrack anchored by Dennis Bovell."

A few of the screenings have Q and As with Brinsley Forde and Dennis Bovell (tonight's session after the 7:30 screening with punk journalist and NYU professor Vivien Goldman is sold out, but tomorrow's with Carter Van Pelt of WKCR and Coney Island Reggae on the Boardwalk still has tix).

The New York Times reviewed "Babylon" in today's print edition and Brinsley Forde and Dennis Bovell were interviewed on WNYC (which can be listened to here).

While copies of the film's 1980 soundtrack can still be found on the web, Dennis Bovell recently released his original score for "Babylon" as a digital album (which contains music not included on the original soundtrack LP).

After its NYC screenings, "Babylon" will play various art house theaters in major metropolitan areas across the US from March through June (check out the full list of showings here).