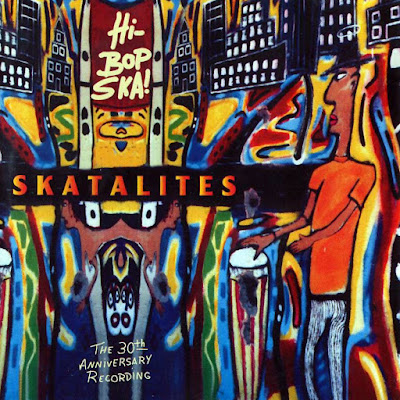 When Hi-Bop Ska was originally issued on Shanachie back in 1994, I definitely didn't pay it enough heed, probably because I was unable to imagine a day when so many of these ska originators wouldn't be around. Back then, The Skatalites played in NYC with great frequency; this was their second new album in the 1990s after '93's Ska Voovee; and the so-called Third Wave of ska was blowing up and keeping me busy (I even worked with several band members during my time at Moon Records). Yes, I took them for granted, as ridiculous and callow as it sounds from this vantage point in time.

So, it's fantastic to have another opportunity to rediscover this superb, Grammy-nominated album--and for the first time issued on vinyl (LPs were on the outs in the 1990s). It's a meticulously recorded and produced collection of new tunes (Tommy McCook's "African Freedom," "Nelson's Song," and "Burru Style"; Roland Alphonso's "Everlasting Sound") and Skatalites classics ("Man in the Street" and "Guns of Navarone") with a core of the band (McCook, Alphonso, Lloyd Knibbs, and Lloyd Brevett) in top form and a slew of guest musicians, including ska superstars Toots Hibbert (on "Split Personality"), Prince Buster (on "Ska Ska Ska"), and Doreen Shaeffer (on "You're Wondering Now"), as well as jazz greats Lester Bowie, David Murray, Steve Turre, and Monty Alexander. With so many jazz musicians on board (and contributing arrangements, like Murray's phenomenal ska take on his own 1976 cut "Flowers for Albert" and new songs, such as Alexander's "Renewal"), one might have been concerned that the ska quotient would be diminished, but a wonderful and completely appropriate balance between ska and jazz is struck throughout (and the Skatalites' incredible rhythm section grounds and propels each track with a rock solid ska beat). For fans of traditional Jamaican ska, it doesn't get much better than this. Kudos to Jump Up for re-issuing this truly essential Skatalites release and reminding us all of when we had it so good.

Agreed on all fronts! This was the album that really introduced me to The Skatalites. I bought the digital version from emusic in the early days of digital music sales, probably in 2001 or 2002, but never owned a physical copy of it. This was the one Record Store Day release I picked up this past weekend. It's aged beautifully and I think Jump Up really did the release justice.