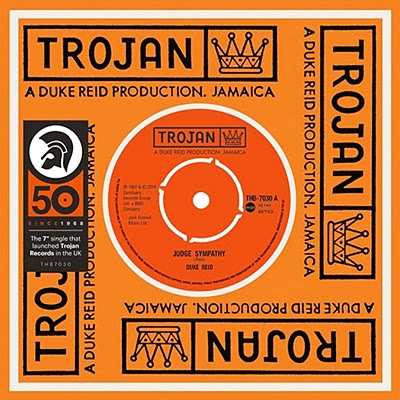 Duke Reid "Judge Sympathy" b/w Roland Alphonso "Never To Be Mine" (Orange vinyl 7" single, Trojan Records, 2018 re-issue): This was the first single Trojan released back on July 28, 1967 (the imprint had been created by Island Records specifically to release Duke Reid's productions in the UK). And as this year marks the label's 50th anniversary (a book and mega box set are forthcoming), it seems more than fitting that this would be re-issued for Record Store Day 2018 (this single was also part of the Judge Sympathy--Birth of Trojan 11 x 7" box set released in 2008). 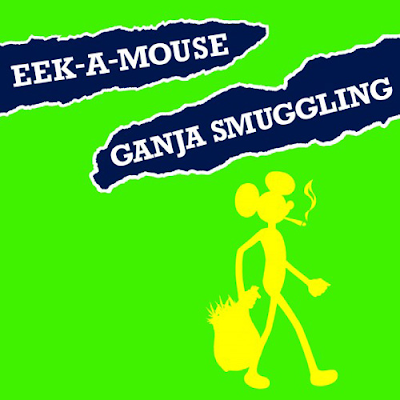 On Duke Reid's "Judge Sympathy"--which capitalized upon/was an answer record of sorts to Prince Buster's rude boy crackdown "Judge Dread" trilogy (which included "The Appeal" and "Judge Dread Dance")--an uncredited Alton Ellis sings "I stand accused," while Judge Sympathy (Reid himself, one assumes), seeing a couple before him for "maintenance," instructs the husband to treat his wife better: "You must give her enough food to make her comfortable in her kitchen. You must also give her water until her child is old enough to carry her own water." Alphonso's track is a lush and lilting instrumental cover of Elvis Presley's 1960's hit "It's Now or Never" (based on Tony Martin's 1949 "There's No Tomorrow," which itself is based on the classic 1898 Neapolitan song "O solo mio" by Eduardo di Capua and Alfredo Mazzucchi). Both cuts are ace.

Eek-A-Mouse "Ganja Smuggling" b/w "Smuggling Dub" (Clear green vinyl 7" single, Greensleeves Records, 2018 re-issue): On this Henry "Junjo" Lawes-produced 1982 hit, one might have expected some sort of rebel posturing about dodging the police whilst drug running, but Eek-A-Mouse's tale (a spare, roots reggae lament, really) is about the extremes of capitalism (and results of racism and colonialism in Jamaica). Either one follows the rules and lives in desperate poverty or breaks the law and lives large: "Down dere in the ghetto I go, where sufferation I once know/Mummy and Daddy, all a' we so poor, we all had to sleep on the floor..." versus "One by one, load up de van, all of a ganja it a ram/Put it on a plane, the week gaan a Spain/Money jus' a pour like rain..." Roots Radics are featured on the b side with "Smuggling Dub." This release marks the first time the title cut has been issued on a 7" single outside of JA--and its dub previously was hard to track down, too. Pick it up, while you can.