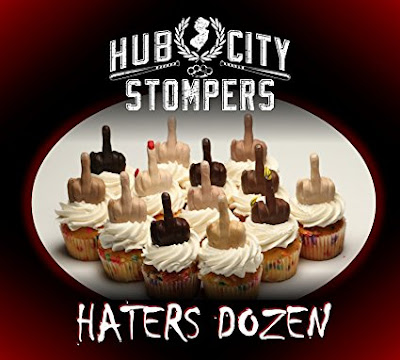 From the cover art of Haters Dozen--a baker's dozen of cupcakes with hands of various hues and genders giving us the finger--it shouldn't be a shock to know that New Jersey's Hub City Stompers have always clearly relished being the defiant bad boys and girls of ska, taking the piss out of everything and everyone (they refer to their fans as droogs), and letting the chips fall where they may. Their targets on their sixth album Haters Dozen are legion (abusers, cheaters, fakers, leaches, and haters) and they take them on with a mix of sharp humor and deadly seriousness--all delivered in this fantastic collection of catchy ska songs that will end up taking permanent residence in your head.

With an intro from Mr. Symarip--Roy Ellis--himself, the album kicks off with "Hub City Stomp," an "East Side Beat" of sorts for the New Brunswick scene ("This is your day of independence/For skinheads, punks, and their descendants/Let that wicked word be spread..."), but then, on a Judge Dread-sounding cut, HCS set their sights on "Mr. McFeely" (about a seemingly anodyne, older character on the scene--like the delivery man on "Mr. Rogers' Neighborhood"--who's actually a predator: "Mr. McFeely, tell me where you been?/Fallen pied piper of the punks and skins...Mr. McFeely, in ya come to creep/When she's passed out drunk, when she's fast asleep/Mr. McFeely, won't ya come outside?/Or will you stay in and hide?"). Fake friends can't put one over on ever-vigilant singer Travis Nelson (the primary songwriter of the album) on "Keepers": "I see snakes creeping’, I ain't sleepin’ in the poppy field/I see the daggers flying towards, but they don't see my shield/With all the cold that I behold you'd think that I would freeze/But I'm just basking in the heat of all my enemies" (love the "Wizard of Oz" reference!). The always-great King Django guest chats on "Father's Day" (about victims of child abuse falling into similarly abusive relationships as young adults). On "What's She Got?" (a real showcase for Jenny Whiskey), rejection and jealousy have never sounded so good: "What's she got that I ain't got?/She's got you/That's what she's got, that's what she's got/Looking for a place in your will/That silly trick is just a midnight thrill/You'll be thinking of me every night/Once you bust your nut and turn out the light."

With its demented, but hilarious "Send in the Clowns" opening, "Bring Back the Dorks" calls out all of the Slackers wannabes: "Yeah, I hope that you’re ready/For my (pretentious) hipster rocksteady tonight...white noise from white boys"), while the ska-core-ish "Night of the Living" goes after scene hijackers and cultural appropriators with equal fury ("We’re zombies who reclaim this rotted wasteland of a scene/It once was fatty bacon, then you made it Sizzlean/A silly, plastic world of kissing ass and dropping names/We never puckered up and didn’t play your reindeer games/Your head went up your anus when ska went Hollywood...No white, suburban kid came off of the banana boat/And if you went to Kingston they would cut your poseur throat/Remember that next time you’re pushing your skathority").

Two bright topical spots are "Philly, What The Fuck?" ("...why is your accent so fucked up?") and the  kind of sweet, no regrets, love-song-of-sorts "Weeks Worth of Wednesdays" ("Lone Stars at night shine bright/And alter what's in your sight/What a mess, what a mess/There were a week's worth of Wednesdays up in that dress/I confess, I confess/That I couldn't have settled for less"). The centerpiece of the album, though, might be trombonist James Kelly's wonderful tribute to HCS' friend, the late Roy Radics of The Rudie Crew, in "Distance Water" (which was his nickname; a reference to how Radics had traveled across the Atlantic from his hometown of London to his adopted New York City). This largely instrumental track features P-Dub of Predator Dub Assassins, some Radics snippets, and phenomenal toasting by Coolie Ranx: "Hey, Mr. Radics, Mister Hot Topics/The law's on the lamb/No, they just try to stop it/You try to protest/Dem jumping on your chest/They don't want the truth to be told/Him try to shed the light on the black man's plight/When we standing up firm/When fight for your rights/No retribution when dem take a life/They don't want no civil war...Nah, we no love dem games that dem play/And the conversation is lame/We don't care what dem say/'Cause we've been fighting power from back in the days..."

Hub City Stompers bring their ace tunes, their considerable chops, and tons of barbed fun for a first-rate album that might just end up making them kind of respectable, despite it all.