Duff Review: The Dirty Notion "How The Story Goes" 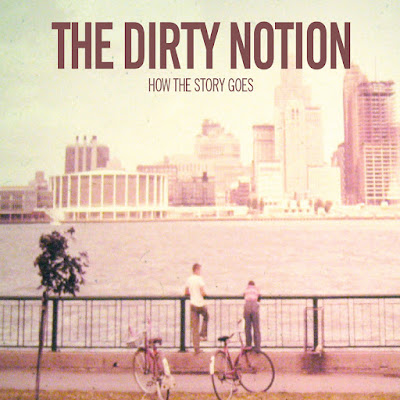 This is the fantastic second EP from Detroit's The Dirty Notion (read The Duff Guide to Ska review of their debut, The Dirty EP), which finds the band continuing to profitably mine late '60s/early 70s skinhead reggae territory (check the phenomenal Glen Adams/Jackie Mittoo-ish "The Boilermaker"), while mixing in choice bits of their hometown's garage rock and soul. The EP roars to a start with a fierce declaration of independence in "Gone" ("Though harsh words/They fight so hard/But my skin is thicker/Than many teeth/So, your words don't mean a thing/A petty mind, it's petty crimes/It's no World War 3 now/I'm out of time/And I won't be turning back..."). "How the Story Goes" is world weary, but wise enough to know what makes the daily grind (more) tolerable (and has a boss rocksteady groove): "Life's stuck on repeat/Every day's the same routine/Something's got to give/Cause this ain't how I want to live/So, give me rhythm/I'll give you rhyme/Put the two together/Makes some days fine/And I know/How the story goes..." (It's another disaffected Gen X anthem, like their superb "Someday" from The Dirty EP.) The Dirty Notion give Aussie proto-punks Radio Birdman's classic "Murder City Nights" their trademark rocksteady treatment, with great results (this track is about being young and bored and "fighting up terminal Seventies stasis" in Detroit--similar in theme to The Selecter's "Out On the Streets" or The Clash's "London's Burning"--and written by RB's Deniz Tek who grew up in Ann Arbor, Michigan; Radio Birdman was heavily influenced by two Detroit bands, The Stooges and MC5). The melodramatic ska track "Devils and Demons" is about being plagued by the manifestation of one's guilt, while the deadly cool and bad ass "Plan B" is a laid-back rocksteady ode to guilt-free (if not hangover free) pursuit of pleasure: "Woke up at 6 this morning/In the middle of the floor/I hear the rain is pouring/I got some sleep, but I want more...Dead men tell no secrets/I brought the Devil to her knees/I hear the preacher preaching/Two deaf ears, no one's listening/We danced the night away/My bones are aching/One, two, three shots, four!"

These are some great tunes from a tremendously good band. The Dirty Notion's How the Story Goes is highly recommended!