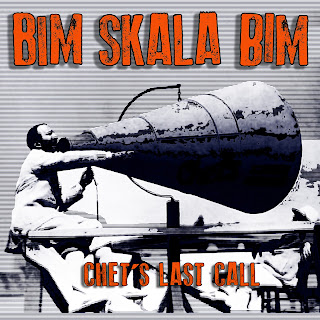 Like The Toasters, Boston's Bim Skala Bim were great pioneers of American post-2 Tone ska--charting a parallel, equally groundbreaking path in the annals of ska: Bim formed in 1983 a few years after the first incarnation of The Toasters; they founded their own ska label BiB (Best in Boston) to issue their own records as well as the Mash It Up (Boston) and Mashin' Up the Nation (US) ska compilations; released their debut album a year after The Toasters' Recriminations EP; and went on to attract and inspire countless fans and bands worldwide (their second album, Tuba City, is one the best ska albums of the late 80s and is one of my favorites!).

Even though Bim have been doing summer gigs in the Boston and Cape Cod area for the past few years (singer and founding member Dan Vitale lives in Panama these days--while The Toasters' singer and founding member Bucket now lives in Spain), it's been just about 13 years since the band's last release Krinkle. So to make up for lost time, Bim Skala Bim are releasing two albums (their 11th and 12th) on September 25: a new CD called Chet's Last Call (all new material) and a digital album called Musical Biscuits (all covers).

But here's the deal, the first 500 people to pre-order the Chet's Last Call CD for $9.99 will receive the digital-only album Musical Biscuits for free. You can place your order through BiB Records here (I've already made mine!).

If you consider yourself to be a ska fan and are anywhere in the New England area, you should absolutely get yourself to one of the three remaining Bim Skala Bim shows this year (their live sets are always stellar), which are taking place later this week:

For more background about Bim Skala Bim and their new material, make sure to check out this really fantastic interview with Dan Vitale at Reggae Steady Ska!

Email ThisBlogThis!Share to TwitterShare to FacebookShare to Pinterest
Labels: BiB Records, Bim skala bim, Mash It Up, Mashin' Up the Nation, The Toasters

Thanks for this news - I've just made my order.