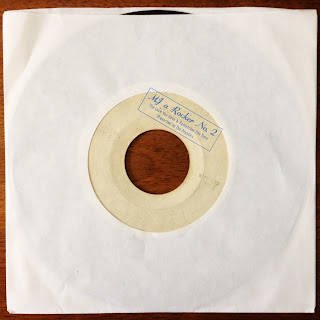 Four years after The Drastics, one of Chicago's finest reggae outfits, released their extraordinary skinhead reggae mash-up of Michael Jackson classics--MJ a Rocker (see what we wrote about it back in 2009 here and you can still download the album for free here)--comes their follow-up vinyl and digital single "MJ A Rocker No. 2: The Love You Save/Remember the Time" (which you can download for free, along with two additional dub versions, here).

The Drastics' fantastic reggae popcorn version of the bubblegum pop hit "The Love You Save," recorded and released by The Jackson Five in 1970 (a great year for skinhead/early reggae on the UK pop charts: The Melodians' "Sweet Sensation" was #41; Boris Gardiner's "Elizbethan Reggae" was #14; Nicky Thomas' "Love of the Common People" was #9; Dave and Ansell Collins' "Double Barrel" was #1; and Bob and Marcia's "Young, Gifted, and Black" also hit #1), is almost impossibly fast (particularly for a song about slowing things down in the heavy petting/going all the way department!) that I actually adjusted my record player's pitch and even switched the speed to 33 1/3 just to make sure I wasn't playing it at the wrong setting (the reality: MJ's voice was really that high and The Drastics' bubbling rhythm section is in overdrive!). The more recent (1992) and darker (the love that was being saved and treasured was had--and is now long over) new jack swing of "Remember the Time" (its video featured Iman, Eddie Murphy, and The Pharcyde, and Magic Johnson in ancient Egypt!) has the Drastics' Hammond organ, horns, and a haunting melodica replacing the synths of the original, but their groove is much warmer, yet equally deep and infectious.

The Drastics are well-schooled in their reggay and their MJ--and we're all the richer for it.

For those of you who prefer their music in tangible formats, the vinyl single of "MJ A Rocker No. 2," the six-track MJ A Rocker vinyl album, and a CD that contains all of these tracks, plus the two "MJ A Rocker No. 2" dub cuts, are all available through Jump Up Records.

(Selectors--and anyone who still plays records at parties--are going to want vinyl versions of both the album and single--every time I've spun MJ a Rocker at ska shows, people have enthusiastically approached me to find out who created this incredible version of one of MJ's hits...)

Email ThisBlogThis!Share to TwitterShare to FacebookShare to Pinterest
Labels: Duff Review, Jump Up Records, The Drastics