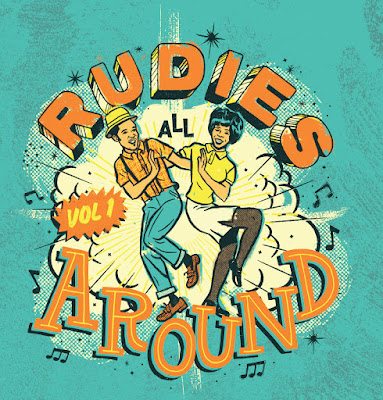 While Sean Flowerdew compiled Rudies All Around, Volume 1--a truly ace survey of current international ska acts--as a means to help promote and support his very worthy ongoing enterprise/labor of ska love, the London International Ska Festival (2019's edition is slated to feature Georgie Fame, Misty in Roots, Keith and Tex, Rudy Mills, The Steady 45s, Chris Murray, King Zepha, Masons Arms, Le Birrette, Erin Bardwell Collective, The Indecision, and many more to be announced over the coming months)--ska fans have the added benefit of encountering/being turned onto a host of incredible bands with minimal effort.

As with most carefully selected comps (and Flowerdew is particularly plugged into the global scene), there's a pretty wide variety of ska styles represented on Rudies All Around, Volume 1, which ensures that most listeners will find something to please them (though there's not much ska-punk--which is okay by me). On the traditional ska tip, things kick off with New Zealand's Atushi and The Moisties' "A Sound Of The Ska," which seems like it's been delivered to us in the present via a time machine from JA in 1964. Italy's all-female Le Birrette showcase their fantastic Deltones-y ska on "Mr A." Channeling Dr. Ring Ding, Masons Arms' "Von Vorn" is an incredible, amped-up Spirit of '69 skinhead reggae track in German. Mexico's Travelers Allstars' "Learned Lesson" is a great Jackie Mittoo-like instrumental, while Argentinians Los Aggrotones tread on great Western reggae territory with "Riding to Sonora." Italy's Uppertones joined by American Aggrolite Jesse Wagner do a fun rendition of the 1950's novelty song "El Cumpari," and the legendary and late Rico Rodriquez is featured on Pama International meets Manasseh's excellent futuristic sci-fi (via the 1970s) "Disobedient Dub" (from their Trojan Sessions in Dub album).

For those looking for 2 Tone/modern ska sounds, there's loads to like here. Ireland's Bionic Rats' phenomenally catchy "No Bottles No Milk" is about trying to get by in life with what (little) you've got (had to look up a lot of Irish slang to completely understand this one). Phoenix City All-stars' extraordinary dubby and haunted version of The Clash's "London Calling" drives home how the imagined dystopian/fascist/post-apocalyptic future of the original is closer to being realized than ever (I can't wait to hear the rest of the album this comes from, Clash Version Rockers!). "When It Rains" from the amazing Lions (whose members include Alex Desert and Deston Berry of Hepcat) is about how America's legacy of slavery continues to play out in all sorts of horrifically racist ways (and comes from their superb Soul Riot album--read our review of it). South Korea's The Rulerz's "Angels With Dirty Faces" may remind one of Euro-ska of the early 1990s. Capone and the Bullets (Scotland) turn in a great, deranged ska cover of Kraftwerk's "Das Model" (and emphasize the predatory creepiness of its lyrics), while The Scotch Bonnets (USA) transform The Ramones' punk anthem "Sheena is a Punk Rocker" into a mellow(er), but still very spirited rocksteady track. Dan P and The Bricks (USA) raucous and infectious "The Show" is about becoming an obsessive ska fan/musician. Italy's Miserable Man's broken-hearted acoustic-y/campfire ska song  "Heart in a Fire" is offbeat and completely winning. One of our favorite earworm cuts on the comp comes from Canada: King Kong 4's phenomenal "Profile of a New Elite" (think late '70s Elvis Costello meets The Specials), a cheery, but dark tale that points out how racists/fascists aren't born but raised.

Really, every song on Rudies All Around, Volume 1 is top-quality and I was introduced to a slew of bands that I had never heard from before. So, mission accomplished!